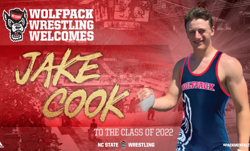 Last week, Jake Cook of Ballston Spa High School joined teammate Tyler Barnes, an undefeated state champion, in committing to North Carolina State wrestling. The tandem will be pushing each other at the next level as they have been for years as they've been wrestling in the same programs since third grade. Both signed their letter of intent this week.

Cook dominated Section 2 last year after taking the runner up spot in the Section behind two-time state champion Kevin Parker of Shenendehowa (now at Princeton) the previous year. As a junior, Cook went 33-5 with 20 pins and surpassed 100 wins for his career. He advanced to the state quarterfinals at 182 pounds in his first appearance at the NYS tournament.

Cook has seen success in the international styles as well as he made the blood round in Fargo in 2016 and is a two-time All-American at the UWW Cadet Nationals in Freestyle. He has placed at the Northeast and Southeast Regionals in Freestyle and Greco as well as winning Cadet titles in New York in both styles.  He's an upper weight to watch in the Empire State this season.

After being named a first team all-area linebacker last year for Ballston Spa, several D-1 AA programs, including Sacred Heart, SUNY Albany and Stony Brook began recruiting him.  So, why did he decide to pursue wrestling at the next level?

"I chose to wrestle in college because I love the process of wrestling, the team aspect and individual aspect," Cook said.  "It's a sport that I really enjoy putting work towards and you really control how good you are. It's all on you."

Cook visited NC State for a weekend back in September and also went to George Mason to look at the wrestling program.  While he had a choice between two sports and several schools, in the end, Cook said his decision was clear.

"Watching my brother [Billy], who wrestled at NC State, and watching all of his success, it was an easy choice," Cook said. "Especially after building a relationship with [NC State head coach] Pat Popolizio and meeting some of the guys on the team, I just knew I fit in very well there and I'm excited to get to work."