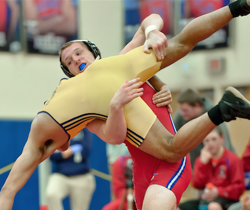 Chris Barker was #1 on the Democrat & Chronicle's list of Ten Section V Boys Soccer Players to Watch heading into the 2017 season -- and he has been a standout for Fairport for years. But he said he never really considered playing soccer at the college level.

"Wrestling has always been my #1 sport," Barker said. "I'll probably miss [soccer] once I don't get to play next fall, but it's always been my goal and dream to wrestle Division 1."

He'll get that opportunity as the returning state placer committed to Binghamton a few days ago, where he projects as a 157 pounder. He also considered Buffalo, Bloomsburg and Edinboro.

"I really connected with the coaching staff," he said. "I loved the campus, the size of the school and the guys on the team. I feel like I can grow the most as a wrestler and a student at Binghamton."

The significant growth he saw on the mat between his 10th and 11th grade seasons was apparent ... and he said it is his biggest accomplishment in wrestling to this point.

"I won a pretty good number of matches my sophomore year, but a lot of them were close," Barker said. "I could've scored more points than I did. In my offseason training, I worked on opening up more, with a mentality to score as many points as I can. I wanted to have fun and enjoy it and just keep trying to score and it made me a better wrestler."

As a sophomore, Barker went 44-5, falling in the Section 5 state qualifier to eventual NYS champ Frankie Gissendanner of Penfield.

"I ended up being A5 on the wildcard [list, one spot from qualifying], and being that close motivated me," he said. "I went to the state tournament anyway and watched my weight class. I saw guys I had wrestled during the year competing and thought this wasn't going to happen again. I wasn't watching from the stands again."

He didn't. As a junior at 160 pounds, Barker went 47-3 with more than 25 pins and captured the SuperSectionals crown. At the state tournament, he won his opener before falling in overtime to eventual runner up Grant Cuomo of Brewster. However, he responded with three consecutive wins in the consolations before taking fourth.

He's looking forward to the chance to wrestle at the Times Union Center for a second time at 160.

"Obviously, my ultimate goal is to be a state champ, but I've been talking to my parents about enjoying the journey throughout my last high school season -- enjoying every tournament with my teammates and not just focusing on that ultimate goal, because that's when mistakes are made," he said. "I really want to have fun, score points and enjoy my senior season."

And afterwards, he will join another team for the first time -- the Fairport unified basketball squad with his younger brother.  The NYSPHSAA defines unified sports as "an inclusive sports program that combines an approximately equal number of athletes (students with intellectual disabilities) and partners (students without intellectual disabilities) on teams for training and competitions."

"I'm really excited for unified basketball - I feel like it will be a really good experience," Barker said.

He feels the same way about beginning at Binghamton next fall.

"I know a lot of the guys on the team - a lot of Section 5 wrestlers like the DePrez brothers, Parker Kropman and Dane Heberlein. On my visit, one thing that really stood out to me was how tight the guys on the team are with each other and how connected they are to the coaching staff. I'm really excited."

Chris Barker mentioned several coaches who have helped him along the way, including Mike Kohl, Todd Forkey, John-Martin Cannon and Bob Arao, as well as training partners such as Zack Barker, Justin Harter and Ben Quattrociocchi.