Another year, another Super 32 crown for Eastport-South Manor's Adam Busiello.  He earned a championship belt for the sixth consecutive time at this event.

Busiello was one of six placers in the boys high school competition from New York.

Three New Yorkers placed in the top three in the girls action, while seven middle schoolers made the podium.

PJ Duke took first place in the 11 & Under division at 85 pounds with a dominant showing.

Read on for more details on all of the New York medalists.

Full brackets are available on FloArena.

According to the announcers at the Super 32 on Sunday, Adam Busiello is now 33-0 in his career at the prestigious event.

After capturing three Middle School titles in Greensboro, he now has claimed three high school championships as well after taking the 120 pound bracket over the weekend.

Busiello notched seven victories, including three bonus wins.  In the finals, he met Travis Ford-Melton of Illinois. After a scoreless first period, Busiello immediately escaped in the second, however Ford-Melton answered with a takedown. Busiello escaped again to knot the match at 2. In the third period, Busiello put on a dominating ride to send the contest to overtime. The New York wrestler attacked from the start of the extra session and hit a super duck for the winning takedown in sudden victory.

Two-time state champion Diakomihalis won his first four matches in Greensboro, over opponents from Florida, Virginia, Pennsylvania and Connecticut, before adding another victory, over New Jersey state champ Anthony Clark, to earn a spot in the semis. Diakomihalis was edged in that bout, 1-0 by the eventual champion (Ryan Crookham), and took sixth after a sudden victory setback to Clark in his final bout of the weekend.

Silverstein went 6-3 at 145 pounds to nab sixth place in North Carolina over the weekend. The two-time state finalist's losses were all by a single point, including in the ultimate tiebreaker in his medal match. The Nebraska commit is now a three-time Super 32 placer.

Cuomo got his hand raised seven times during the tournament on the way to fifth place. Among his victories were a pin, three shutout wins and a forfeit as he gets ready for another run at a state championship in New York after taking second in 2017.

Logan won his opening two matches and then captured four out of five in the consolation bracket to take home a fifth place finish at 182 pounds. The Section 1 standout recorded a technical fall and defeated Pennsylvania's Dalton Group 8-6 to conclude his tournament.

The 2017 99 pound Division 2 state champion won his first four bouts at 106 with a technical fall in his opener. After a loss to California's Richard Figueroa (who made the finals), Noto won two of his last three matches, including a 3-1 victory over CJ Composto of New Jersey for seventh.

In addition, Jakob Camacho of Connecticut, who competes for Iowa Style Wrestling, won the 126 pound championship on Sunday. Camacho topped Beau Bartlett 6-4 in the finals, to cap off a 7-0 weekend. 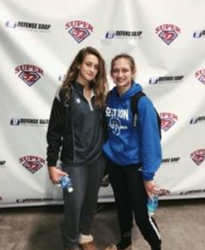 Macaluso didn't give up a point in her first two bouts in dominant victories. She notched a 10-0 win in her first wrestle back match before taking fourth.

Macaluso bounced back from a loss in her first match with three straight victories in the wrestlebacks to grab bronze. She outscored her opponents by a combined 25-5 in the consolation bracket.

Cabrera got her hand raised three times at 130 pounds to notch fifth, finishing with a 4-2 decision over Tzi Schwartz of Pennsylvania in her last bout of the day.

Cancelleri outscored her opponents 23-2 on the way to the finals at 160 pounds before taking second place behind Gracie Kristoff of Illinois.

Crosdale went 3-1 in round robin competition to earn a runner up position at 172.

After winning a loaded 99 pound weight at the Journeymen Classic a few weeks ago, Fea earned third at the Super 32 . Fea pinned his first four opponents and topped fellow New York wrestler Rocco Camillaci in the bronze match.

Camillaci won his opening three matches, including two pins, before a setback to the eventual champion. He blanked his first consolation foe, 7-0, before facing Fea for third.

Mulhauser outscored his first three opponents by a combined 18-3 before registering a pin in the quarterfinals. He won another match in the wrestlebacks before taking fourth.

Hibler racked up six wins during the event, including two pins, on the path to fifth place.

Baer, a 2017 Division 2 state medalist, picked up five wins over the weekend to notch seventh place at 105, including a fall.

Scott was victorious four times at the event to make the podium in eighth.

Rogers ended with a win to leave Greensboro with a seventh place medal.

Duke pinned Pennsylvania's Eli Carr in the 85 pound championship match to win the Super 32 title.  He was dominant throughout the event, with another fall, an 8-1 decision and a 10-0 major. His sister, Abby Duke, won a pair of matches at 103 in girls competition.

Drapaniotis posted a major and a 5-3 decision as he grabbed silver at 90 pounds.

Pollack finished on a high note, getting his hand raised in his final match to pick up fifth.