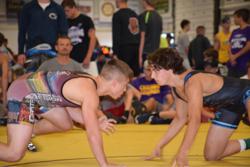 For many years, Rocky Point’s Anthony Sciotto knew where he wanted to go to college.

“When I was growing up, I thought going to a military academy was so prestigious and cool,” he said. “I had a cousin at West Point and my grandpa was in the Navy for a few years. I went down to Annapolis and the town, the people, everything - it seemed like a perfect place to be. The Naval Academy has been my dream college since I was a little kid.”

Sciotto went to Annapolis for an unofficial visit at the beginning of his junior year and then again for a summer seminar this past June and those trips confirmed his feelings on attending Navy .

“I knew it was where I wanted to go and I committed then,” he said. “I have such a great connection with the coaches. The coaching staff as a whole is full of nice, down to earth people. I also really get along with the wrestlers down there. I went a few weeks ago again and had the greatest time. It was awesome.”

Sciotto, who projects as a 133 pounder at the next level, will bring quite a few accolades with him when he goes to college.

When asked, he said the event that stands out to him most from his career at this point is his All-American performance at the NHSCA Junior Nationals in Virginia Beach this past spring.

Sciotto compiled five victories on his way to a fifth place showing at 113 pounds, including a fall over Enrique Sanchez of New Jersey in his last bout.

“I went in there without many people knowing who I was at the national level and I kind of roughed some people up,” he said. “I went into the semis against a kid ranked fifth in the nation and it was a tough match. We scrambled back and forth. It was a good tournament. I beat a bunch of well known wrestlers.”

Sciotto has battled with well known wrestlers in New York during his varsity career. As a sophomore, he captured nearly 40 victories, and was excited to make his debut at the state championships.

“It was really just so surreal to me,” he said of competing at the NYS tournament. “It’s so much bigger going to the Times Union Center - it’s a whole different experience than anything else during the high school season. You’re there with a bunch of outstanding wrestlers. Going into that year, my goal was always to win - my eyes were on gold, but it didn’t go that way.”

Sciotto did earn All-State honors with a fifth place showing at 99 pounds.

The Section 11 wrestler moved up to 113 pounds for his junior campaign and his winning ways continued. He piled up 47 victories, including seven wins over All-State wrestlers.

In his second time at the state tournament, Sciotto picked up two quick pins before a semifinals setback against nationally-ranked Greg Diakomihalis of Hilton, who handed him his only two contested losses of the season.  Sciotto responded with a pin and a decision to make the podium for the second straight year - this time with a bronze finish at 113.

"It was a pretty good tournament for me,” he said. “I obviously wasn’t happy with the semis match but I wrestled back for third.”

Sciotto notched some big victories in the offseason as well, winning by fall against two-time state champion Orion Anderson of Schuylerville at the 1000 Islands Duals and grabbing the title at 120 pounds at the Journeymen Fall Classic.

"Journeymen is a fresh start every year after not wrestling in a lot of tournaments for a while," he said. "I felt comfortable and relaxed and was happy with how I wrestled.”

That’s the feeling he hopes to take with him into his senior season, where he is likely to compete at 120 pounds.

“Right now I’m focusing on training for college and also training with my brother [sophomore Logan Sciotto],” he said. “I have my future plans set and now I want to help my brother get into colleges he wants to and reach his goals.”

And there are some big team goals on the table for Rocky Point, after winning the Section 11 tournament and dual titles in 2017. The squad returns several All-County performers and has added some new faces.

“For us, it’s always about state championships and county championships,” Sciotto said. “This year is a lot different with the official dual meet championship happening for the first time. Our whole lineup is training to get a head start. To be the first team to ever win it - that would be a major accomplishment.”

Sciotto’s aiming for quite a few more accomplishments this year.

“Obviously, I want to be a state champ, a county champ and an Eastern States champ,” he said. “Really, I just want to win everything possible.”

Anthony Sciotto mentioned practice partners like Logan Sciotto and Ryan Callahan and thanked coaches such as Billy Coggins, Anthony Volpe and Darren Goldstein as well as strength coach Jeremy Pahl and of course, his parents.