Congratulations to Dylan Ryder on his commitment to Hofstra University.  Ryder, a two-time state finalist who won the NYS championship at 106 pounds for Half Hollow Hills West in 2017, projects as a 125 pounder for the Pride.

For more on Ryder, see a feature article from earlier this month below. 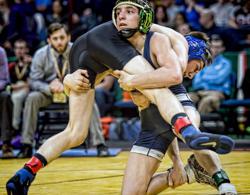 THIS ARTICLE WAS ORIGINALLY POSTED ON AUGUST 1, 2017.

Dylan Ryder didn’t make his varsity debut for Half Hollow Hills West until his sophomore year, but when he did, he quickly established himself as an elite 99 pounder.

“My freshman year I wasn’t able to wrestle because I tore my ACL and had to get surgery and do rehab,” he said. “In 7th and 8th grade I was too light -- I wasn’t the minimum weight.”

When he did get on the mat as a 10th grader, he won 26 of his first 27 matches (23 by bonus points), including the championship at the Eastern States Classic.

“I knew Eastern States was a big tournament going into it,” he said. “I felt like it was a chance to prove to everyone that I was one of the best in the state.”

He did that and then continued to dominate, going unbeaten the rest of the way heading into the state championships.  In Albany, Ryder recorded two pins and a major to punch his ticket to the title match, where he dropped a 7-4 decision to his Eastern States finals opponent, Greg Diakomihalis of Hilton.

“The state tournament was a big opportunity,” he said. “It was great to wrestle in that situation, but I came up short of winning a state title. I knew I was right there with the best -- that match could’ve gone either way. I knew I needed to stay focused and keep working hard to accomplish my goal of being a state champion.”

A few months later, he traveled to Fargo to compete at the Cadet Freestyle Nationals and came home with an All-American performance (8th at 106).

“At Fargo I got to wrestle a different style - a style I wasn’t used to,” he said. “I picked up a lot of stuff that made me a better wrestler.”

He was determined to be a state champion in his junior campaign and that’s exactly what he did, up a weight at 106.

Ryder registered a 41-1 record as an 11th grader, with his only setback in the ultimate tiebreaker in the Eastern States finals to Eastport-South Manor’s Zach Redding.

He topped Redding in the semis at the state championships before besting Brockport’s Cody Anders with a 15-0 technical fall in an impressive finals performance.

“I wanted to show everybody that I’m a dominant wrestler,” he said of that commanding victory at the Times Union Center.

He did that in the state capital and then again in the spring at some top notch events.

At the NHSCA Nationals in Virginia Beach, Ryder won the Junior crown at 106 with six victories, including two pins, a technical fall and an 11-4 decision over California state champ Jonathan Prata in the title bout.

He demonstrated his outstanding top wrestling, featuring tilts throughout, and did so again as he grabbed fifth at the FloNationals at the same weight, including four bonus point victories and a 6-0 win over Pennsylvania state titlewinner Doug Zapf.

“I’ve always worked hard in the room every day, on all different positions,” he said. “Through the years of learning technique, I became a dominant top wrestler and all around tough wrestler. Going to NHSCAs and winning that tournament meant a lot to me. It put my name at the highest level and helped me learn to win in bigger situations.”

He’ll look to continue to win in big situations in his final year of high school at either 113 or 120 pounds and then at the Division 1 level in college, likely at 125.

Ryder said he’s about to start visiting colleges now, and is in contact with Maryland, Buffalo, Hofstra, Ohio State, Brown and Eastern Michigan.

“I’m just going through the process,” he said. “I’m not in a rush to make a decision.”

Of course, he still has a number of things he’d like to accomplish before leaving Half Hollow Hills West.

“I’ve been training hard at Barn Brothers every day,” he said. “I’m going to Super 32 and I want to win more national titles and another state title this season.”

Due to injury, Ryder got a bit of a later start on the varsity level, but so far, he's certainly made the most of the opportunities he's had.

Dylan Ryder wanted to thank coaches Joe Scholz, Mike Patrovich and Vougar Oroudjov as well as his family which “has been a big influence on my wrestling career.”