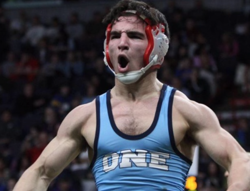 Matt Grippi of Fox Lane was thinking about his college decision for most of his junior year.

While at the North Carolina State Intensive Camp on Monday, he knew the time was right.

“I’ve been talking about possible schools all year with my family, my coaches at Iowa Style, John Degl and Anthony Tortora, and my coaches at Fox Lane, Anthony Rodrigues and Tim Giambolvo,” Grippi said on Monday night. “NC State stood out the most to me. I know Coach [Pat] Popolizio personally and I know what he’s capable of. With my style, I know that coaching staff can bring me to where I want to be. I came down for the camp and really liked it. I went on a campus tour with coach [Frank] Beasley and I knew it’s where I want to be. Today was the day to commit.”

Ranked the #88 recruit in the nation by Intermat, Grippi joins another New York wrestler, state champ Tyler Barnes of Ballston Spa, and fellow Iowa Style Wrestling member Jakob Camacho of Danbury (CT) as Wolfpack recruits for the Class of 2018.

Grippi said he isn't sure what weight he will wrestle in college but expects it will be down at 141 or 149 pounds in the first few years. (He said before hitting the scale [for the 152 pound class] at the state tournament last year, he was "eating a bagel on the weigh in line").

One thing is for sure - he already has quite a few connections in Raleigh.

“I’m really close with Jakob Camacho,” Grippi said. “He’s one of my best friends. I knew [NC State multi-time All-American] Kevin Jack when he was in high school too. We rolled around a little bit at Iowa Style. Sam Melikian is another New York guy here and Sam Speno from Fox Lane just graduated and is still living down here. I’ve been close with [Speno] my entire life. I also really like the academic program. I think it's manageable and it suits me really well. There were so many reasons. Knowing a lot of people at NC State was a big influence on my decision.  I’ll have a lot of people to help me with the transition.”

His transition into high school wrestling was extremely smooth. As a seventh grader, he was a varsity starter and took third at the Section 1 championships. In his eighth grade season, Grippi recorded more than 30 wins, including over the eventual state fourth placer before winning a match in Albany as a freshman at 132.

The Fox Lane standout then made a leap as a sophomore, winning 50 times and earning a spot in the NYS championship match at 138 pounds.

“Being in the finals that year - it was awesome,” he said. “At Iowa Style, it’s our goal to build state champions and Division 1 wrestlers. I had been working so hard, for so long. There were so many emotions and feelings going into it. My coaches made sure I was relaxed and it was really exciting. It was a surreal moment.”

In that bout, Grippi lost for just the second time of the season and to the same opponent as before - the #1 wrestler in the nation at that time, Yianni Diakomihalis of Hilton.

He came back as a junior and again racked up victories. After competing at 145 for most of January, Grippi decided on 152 pounds for the postseason. He won by pin and major in his first two bouts in Albany before facing Evan Barczak of Monroe Woodbury, a familiar opponent, in the semis.   Barczak led 3-1 heading into the third period.

“He shut down my offense to that point, but I believed in myself and my conditioning,” Grippi said. “I got a quick escape and I knew I had plenty of time to get a takedown. I noticed that off the whistle he would take a heavy step forward. With 20 or 30 seconds left I got in on a low single and we got into a pretty fun scramble. I came out on top and all I remember is looking up and seeing that there were 10 seconds left. It was the longest 10 seconds of my life. After it was over, it was the first time I ever really celebrated after a match. I threw my hands in the air. It was the best feeling.”

That victory sent Grippi into the state finals for the second year in a row. This time his opponent was Plainview’s Peter Pappas.

“The emotions were still the same as the year before, but the circumstances were different,” Grippi said. “Against Yianni, there probably wasn’t a person in the gym other than me, my family and my coaches who thought I could win.”

Pappas, who had also lost to Diakomihalis in the state finals (twice), came out on top in a 7-3 decision.

“Pappas was tremendous,” Grippi said. “He shut me down. All the credit to him. My only emotion afterwards was embarassed. It was one of the worst matches I wrestled. When I got off the mat, all I could do was cry. My coaches just came over, patted me on the back and told me to remember the feeling, especially when you don't feel like putting in the extra work. I’ve been using that ever since.”

Grippi’s been putting in plenty of work, including at Iowa Style Wrestling four to five times per week, whether it be private lessons with John Degl or other practices. He’s also been doing more freestyle than in past offseasons and said he’ll be traveling overseas to train with an Italian coach in a few weeks.

All the training is toward a singular goal for Grippi’s final high school run.

“Winning a New York state title, that’s the first thing that comes to mind for next year,” he said. “I have to get that state title.”

And it’s not just for him.

“Wrestling means the world to my family,” he said. “I have three older brothers who wrestled in college. My oldest brother Joey made the state finals once and lost. My whole family wants that state title. This year’s loss in the finals - my brothers took it personally. They took it worse than I did. A state title would mean the world to all of us.”