Nebraska is Next: 2x State Finalist Jake Silverstein of Hauppauge Chooses the Huskers

Over the weekend, Jake Silverstein of Hauppauge made his college decision, choosing the University of Nebraska.  Silverstein, who is ranked as one of the top 100 seniors in the country, is a two-time state finalist and a multi-time All-American.

"Right when I got to Nebraska, I loved the area and I knew it was the place for me," Silverstein said. "Most people think Lincoln is farmland with nothing to do, but it reminds me of my home because it is a little New York City. I loved the team, the coaches and the hard working environment."

He is certainly setting his sights on big things at the college level.

"My goals are to be a 4x Big Ten champ and 4x NCAA champ," he said. "With Coach [Mark] Manning, Kendric Maple, Jordan Burroughs, James Green, Coach [Bryan] Snyder and everybody on the team, I know I will succeed and reach my goals. The coaches really care about their guys and the guys on the team are great and love winning just like me. Also every wrestler on the team has the same mentality as me, which is great."

Currently ranked ninth in the nation at 152 pounds by FloWrestling, Silverstein is registered for the Super 32 this weekend and will be shooting for a NYS title in his final season for Hauppauge.  He can't wait to head to the Big Ten.

"I loved everything about the University of Nebraska -- there is not one thing I did not like," he said. "The team is a family and I wanted to be a part of that. I can't wait to start training with the guys and start winning titles. Go Big Red."

Jake Silverstein added, "I just want to say thank you to my family, friends and coaches for getting me here."

For more on Silverstein from an article posted in the summer, see below. 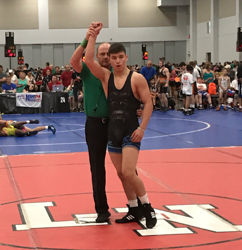 In May, Jake Silverstein of Hauppauge went 10-1 for Team Kong at the NHSCA National Duals, as the squad won the 175+ team tournament for the second year in a row.

Among his victories was a 2-0 decision over NHSCA Senior Nationals champion Franco Valdes of Florida in the semis.

“That was a pretty good win,” Silverstein said. “The whole experience was great because we all became brothers basically. It’s a great time to be on a team like that where everyone is pushing each other, wanting to win a national title.”

It was Silverstein’s second time in Virginia Beach this spring, as he also picked up individual All-American honors at the NHSCA Junior Nationals at 145 pounds with a fourth place showing.

It wasn’t the first time the Suffolk wrestler made the podium at a national event. He twice placed at the prestigious Super 32 and he’ll have a chance to add to his All-American awards when he competes at Fargo next week.

“I haven’t really wrestled that much freestyle, but I’ve been training a lot this summer,” he said. “I wanted to wrestle a big tournament this summer and I’m excited for Fargo. I’m ready to win.”

Silverstein has won quite a bit in high school. In fact, after starting as a middle schooler for Hauppauge, he already had 100 victories during his freshman year and said he’s close to 200 now.

He’s been in some monster weight classes along the way and made the state finals twice, including as a ninth grader at 106 pounds.  The NYS championship match against Jacori Teemer of Long Beach went to the ultimate tiebreaker, where Teemer prevailed, 4-3.

“It was definitely pretty cool to be in the finals as a freshman,” he said. “I loved wrestling in front of a lot of people. It was a great match - it could’ve gone either way. It came down to the last overtime, he picked bottom and I got a stalling point on me.”

He was among the favorites the following season at 120 pounds, but suffered a significant injury during the Section 11 championships.

He decided to compete at the state tournament and went 1-1 before defaulting out and left the Times Union Center determined to return to All-State status the next year.

“I was definitely motivated,” he said. “I started training a couple times a week with Anthony Abidin and I worked every day at Vougar’s [VHW Wrestling] and at Hauppauge. I knew I needed to keep working hard.”

Some of that hard work was with Teemer and Vito Arujau of Syosset at VHW.

Arujau, the top 138 pounder in the country, handed Silverstein his only two losses of his 40-2 junior season as the Hauppauge wrestler was the runner up at the Eastern States Classic and the state tournament.

“I was happy with the way I wrestled my junior year,” Silverstein said. “I thought I wrestled good matches against Vito. I went after it against the top guy. Vito’s #1 in the country. That’s where I want to be.”

He’s likely to meet other nationally-ranked opponents in Fargo, where he knows college coaches will be watching.

Silverstein is listed as the #65 recruit in the Class of 2018 nationally according to both Intermat and FloWrestling.

He’s taken some unofficial visits and said schools on his list include Iowa State, Maryland, Old Dominion, Nebraska, Hofstra and Bucknell. He expects to take the mat at 149 pounds at the next level.

“I’ll probably make my college decision this summer after Fargo,” he said. “I’m really focused on winning -- Fargo, Super 32, Eastern States, states. This is the year I just want to dominate.”