Congratulations to two-time state champion Orion Anderson on his commitment to Binghamton University.  Anderson is a three-time NYS finalist who earned second at the NHSCA Nationals in 2017.

The Schuylerville senior projects to compete at 125 or 133 at the college level for the Bearcats.

For more on Anderson from a feature story earlier in the summer, see below. 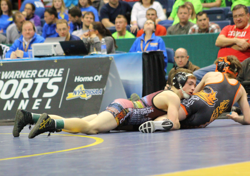 It's been a busy summer already for Orion Anderson of Schuylerville.

The two-time state champion said he's competed in a number of events and also is coaching young wrestlers a few nights per week. And, in addition to his own wrestling practices, there are workouts for football.

"I played football from elementary school to eighth grade but then stopped," he said. "It's my senior year and I want to do it again. I miss it - it's fun and I haven't played for a long time. I'm pretty excited to play defense - to get to hit people. But I won't stop wrestling. I'll still be wrestling a lot."

Anderson is one of the top seniors in the Empire State and has accumulated a strong resume on the mat. As a freshman, he earned a spot in the state finals at 99 pounds in Division 2 before finishing as a runner up.

He returned to the finals as a sophomore and this time earned gold at 106 pounds.

"The first state title was harder [than the second]," he said. "I was more conservative. You feel more nervous when you're out there and you haven't won a title yet."

He looked completely in control in Albany in 2016 as he pinned his opening round opponent and followed with three victories in which he outscored his foes by a combined 25-5. (Three of those opponents have been state finalists in their careers, with the other a two-time third placer).

As a junior up at 120, Anderson made the championship bout at the Eastern States Classic for the second straight time, with his only loss of the campaign coming in a 5-4 decision in the finals against nationally-ranked Jakob Camacho of Connecticut. He won close to 40 matches by bonus points.

However, illness struck him in the postseason, adding more challenge to his second title run.

"I ended up getting really sick right at the end of the year," Anderson said. "I had to push through it. Towards the end of some periods, I could feel it. In my semis match I almost puked a few times. But I knew what I had to get done and I was able to focus on the wrestling. Being there a few times before at the state tournament calmed me down and it was easier to win the second one."

He credited an enhanced offense as one of the main reasons.

"I definitely improved in my attacks," he said. "I was a little more aggressive than years past. Confidence goes a long way when you're wrestling."

The confidence carried over to spring events, where Anderson earned All-American honors with a second place finish at the NHSCA Junior Nationals and fifth at the FloNationals.

"I felt awesome at those events," he said. "I came close in the finals [at NHSCAs]. I lost in overtime. I'll definitely be back there next year. It was awesome to get different looks and get to wrestle so many people from so many different states."

Then, back closer to home, Anderson added a pair of titles at the NYS Freestyle and Greco Roman Championships to earn the New York Triple Crown.

"I was up a few weights there, getting used to bigger kids and bigger weight classes," he said. "I'm working on getting strong for the weight. I think I'll be up at 126 or 132 this year."

"I'm not too sure yet, I've just gotten started," he said. "I've been talking with Binghamton and NC State a lot. I took an unofficial to Binghamton. It's a nice school and there's a good atmosphere there. There a lot of New York guys I know on the team."

He said he'd like to make his decision by the end of the season.

"My goal for my senior year is to dominate and keep attacking - not get lazy and become a defensive wrestler," he said. "I want to always keep attacking."

That mentality will make it difficult to keep him from capturing a third straight NYS championship.