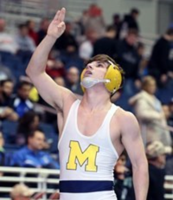 LIU Post Head Wrestling Coach Joe Patrovich announced the addition of 12 new recruits that will don the green and gold for the Pioneers in the 2017-18 season.

The recruiting class features a lot of homegrown talent. A total of 11 incoming grapplers hail from Long Island and all 12 student-athletes list their hometowns within the state of New York.

The group features multiple All-State wrestlers from 2017. Hunter Scutellaro of Massapequa finished third in New York as a senior and was a Nassau County champion. In the upperweights, Greg Hodulick of Islip was a Suffolk runner up and a state placer in Albany, while Damien Caffrey (John Glenn) was ranked in the national top 20 during the season. Caffrey won the coveted Eastern States title at 220 pounds and made the podium at the state tournament.

As assistant coach Michael Zimbler said, "There will be stiff competition in many weights!"

Read on below for more on the recruiting class.