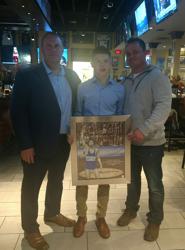 Trent Svingala got the attention of college coaches around the nation with his undefeated state championship season in 2016-17 for Maple Hill in which he scored bonus points in 38 of his 42 bouts.

The lightweight standout was contacted by a plethora of programs, including Cornell, Army West Point, Navy, Air Force, Harvard, Princeton, Brown, Michigan, NC State and Buffalo, among others.

But before taking the mat for his junior wrestling campaign, Svingala made his college decision, as he gave a verbal commitment to Cornell a few days ago.

“When I thought about it, I thought it might be cool to say I went to Harvard and West Point has a history and reputation that is second to none, but it really came down to Cornell and Buffalo,” Svingala said. “I love the coach and staff at Buffalo and a couple of the wrestlers that I’ve been able to get to know from camps and clinics. It made the decision very hard for me. But Cornell has an amazing coaching staff and facilities and another thing I based my decision on was the smaller campus and the Ivy League education. Cornell really has the total package.”

Following his unbeaten sophomore campaign, Svingala had an impressive offseason at 120 pounds. That included victories over two-time Cadet World Champion Kurt McHenry in freestyle and against Aden Reeves of Iowa, who is ranked #34 in the Class of 2019 by FloWrestling, in an unbeaten showing at the NHSCA National Duals.  He also captured the New York State Triple Crown by winning Freestyle and Greco titles.

The Maple Hill star said he will compete at 120 pounds during his 11th grade year and believes he projects at 133 or 141 pounds at the next level.

For more on Svingala from an article posted this summer, see below. 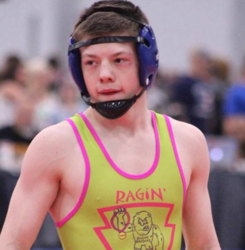 Became a Triple Crown winner … and then topped another Triple Crown champion from a power wrestling state to cap off an unbeaten weekend at the NHSCA National Duals.

It’s fair to say that it’s been a highly successful few months for sophomore Trent Svingala of Maple Hill.

He left the Times Union Center as a freshman in 2016 with a fourth place finish at 99 pounds in Division 1 to cap off a 40-4 season that also featured a fourth place showing at the Eastern States.

“It was my first time [at the state tournament] and it was a great experience with a solid finish,” he said. “Especially in that bracket where four guys are [now] state champions. With fourth you always think you can do better especially since I beat the kid I lost to for third earlier in the tournament, but overall it was a good freshman campaign.”

Svingala strived to move up the podium and got to work.

“I wanted to sharpen up a little bit," he said. "I was rusty on my feet, I wanted to have more go to moves and work on the ones I already had. I think everything improved a little bit, but on my feet, my work paid off really well. I was able to get my takedowns where I wanted them.”

That appeared to be the case during the 2016-17 season, in which Svingala was in control throughout at 106 pounds. He compiled a 42-0 record with 23 pins. Only four of his victories were by regular decision. With that type of dominance, Svingala entered the state tournament with high expectations.

“I was feeling pretty confident,” he said. “I was kinda upset with the second seed, but I understood that [Jon Charles of Central Valley] was a returning state champ. But I beat him last year, so I knew a little bit of what to expect. I wanted to go in and finish the year strong. I think I did that pretty well.”

He started with a first period pin before facing Canisteo-Greenwood’s Bradley Cheek in the quarters. Svingala said he notched a takedown in the first 30 seconds and led 2-0 entering the third.

“I think I picked neutral and I probably should’ve taken down,” he said. “He took me down and I guess I was a little surprised because it was the first takedown I’d given up all year. I just wanted to stay focused and get it done in overtime. About 20 seconds into sudden victory, I went to my go to move. He defended the first move but I was able to switch off to a throw by to win it. He adjusted really well, it was a close match.”

The next one wasn’t close, as Svingala registered a fall in less than two minutes to set up a finals clash with previously mentioned 2016 NYS champ Jon Charles.

“I’ve wrestled [Charles] a lot, since I was about 10,” Svingala said. “I wrestled him last year at Eastern States to get into the placing rounds. That was the first time we wrestled in high school. I knew what I was getting into going into that match.”

The Section 2 standout definitely looked ready.  Shortly after the whistle, Svingala attacked and he built a 4-0 lead after a quick takedown and back points. After an escape by Charles, Svingala picked up another TD and held a 6-1 advantage after the initial period.

“It was as good a start as I could’ve imagined,” he said. “Especially in the state finals. And then I got some caution points in the second when he jumped the whistle."

He had a commanding lead heading into the final stanza.

“Going into the third, I was feeling pretty good,” Svingala said. “I was just trying to take in the experience. It’s the kind of thing you really want to cherish because not too many people get there. When there was blood time, I took in the moment a little bit, but then it was time to get back to business and finish off the match.”

“When it was over, I just thanked my coaches and my dad for helping me get to where I was,” he said. “All the time they spent with me, the long practices, the long days, the long car rides to tournaments -- it paid off. I wanted to thank them because without them, I wouldn’t have gotten there.”

A few weeks later Svingala showed his freestyle prowess, up at 120 pounds, against the top notch field at the Journeymen Freestyle Classic.

“I saw the roster before the tournament and I saw a lot of tough guys,” he said. “I was just excited to face that competition to see how well I matched up.”

In his first bout, he topped Nurymbet Atabekuly of Kazakhstan.  He continued to wrestle well, advancing to the third place contest in a bracket that included numerous placers from New York and other states.

In that bronze bout, he took on Kurt McHenry of St. Paul’s (MD) who won the Cadet Freestyle World Championship in 2016 for Team USA.

“Wrestling a World champion - it was a great opportunity,” Svingala said. “I wanted to go out there and face the best guys and prove I’m good enough to hang with them and beat them.”

He did. Svingala took control from the start with an early pushout and owned a 7-0 advantage before locking up a cradle and recording the pin.

His success in the international styles continued at the New York State Freestyle and Greco championships, as he won two crowns at 120 pounds, with every victory by bonus points, to complete the Triple Crown.

“I knew about the Triple Crown and had some friends who got it,” he said. “I wanted to achieve something I never achieved before. It was in the back of my mind. The night after I won Freestyle, one of my coaches said, ‘Next up, Triple Crown.’ That got me excited going into the next day to finish it out.”

After all those accomplishments, however, Svingala said this past weekend at the NHSCA National Duals in Virginia Beach provided the most memorable achievement for him.  Competing for Ragin Raisins, Svingala went 10-0, defeating Iowa Triple Crown winner Aden Reeves, ranked #14 nationally on FloWrestling, by a point in a key matchup.

“Virginia Beach stands out to me because I was able to go undefeated while we faced so many quality teams,” he said. “I didn’t figure out who [Reeves] was until afterwards. That was a really quality win for me and hopefully it gets me ranked somewhere. I had a few close matches, but that was the toughest one. The competition was really tough.”

That will be true again this weekend as Svingala takes the mat in Akron, Ohio for the UWW Cadet Nationals.

“I haven’t wrestled at the World Team Trials or Fargo before,” he said. “I’m excited to go against the best guys.”

After all the stars he’s beaten recently, no victory for Svingala will be a surprise.

Trent Svingala wanted to mention a few people. “My brother [Caleb Svingala] is a great partner for me. He helped me get this far in my wrestling career, helped me to keep focused and whenever I need help, I always have him within arm’s reach. My dad [Tom Svingala] has always been a great coach for me. I’m also at a great club right now, Journeymen, with Frank Popolizio who does a lot to help me and get me to the bigger stages. My Maple Hill coach Tommy Gibbons, I’ve known him for most of my life; he’s like a family friend. I know I can always reach out to him and he’s a great coach.”