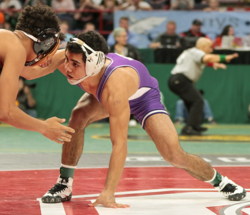 Victor state finalist Mike Venosa watched his brother graduate from Cornell just a few days ago. He looks forward to earning his degree from the same institution in the future, as he committed to the Big Red during his senior year.

“I decided a while back that I wanted to go to Cornell,” he said, mentioning that he also considered schools like Brown, Bucknell and Penn and will be part of the Finger Lakes program next year. “The academics and the coaches were the two biggest reasons.”

The future 133 or 141 pounder racked up close to 140 wins in his last three high school seasons with less than 10 total losses.

As a junior, he topped state placers Ben Tepperman of Hauppauge and Hunter Dusold of Locust Valley and punched his ticket to the Times Union Center.

“I was feeling pretty good going into the state tournament and I got a pretty decent seed,” he said. “But it was my first time there and I put a lot of pressure on myself and I didn’t wrestle very well. That experience was a big help for this year.”

After another strong regular season campaign, Venosa returned to the state capital as a 12th grader for the biggest high school event of the season. He began with two decisions and then notched a major in the semifinals in Albany to nab a spot in the finals against nationally-ranked Jacori Teemer of Long Beach.

In that 132 pound title bout, Teemer picked up his fourth NYS crown with a hard fought 1-0 victory.

“Even though I lost in the state finals, it was probably my favorite match of my career,” Venosa said. “I wrestled [Teemer] before and put a lot of mental and physical preparation into what I needed to do in the weeks before the state tournament. He’s tough to score on and I came close but wasn’t able to get the takedown. It was still a fun experience. I watched the state finals when I was younger and that was where I wanted to be when I had the chance.”

In addition to Teemer, Venosa has battled with many of the top wrestlers in the state over the years, including a recent 4-3 loss to Vito Arujau at the Pop & Flo National Duals. At that event, he helped lead Superior to the title, with a major decision in the championship dual over state qualifier Tyler Albis.

“I’ve always gone to big tournaments in the spring and summer,” he said. “I wrestle with Superior a lot and try to stay consistent working hard throughout the year so I never really skip a beat.”

That work led him to his state finals appearance.  In fact, Venosa, who plans to major in business or finance,  was one of several Big Red recruits to compete in the NYS championship round in 2017, along with Hunter Richard of Holland Patent and Vito Arujau of Syosset. [Four-time titlewinner Yianni Diakomihalis was out with an injury].

Those wrestlers are part of the Cornell recruiting class that was ranked #1 in the nation by FloWrestling and The Open Mat.

“It’s exciting to have so many great wrestlers coming in,” Venosa said. “It’s something I’ve been looking forward to - a college room full of people who are so committed. I’m excited to be there with so many hard workers getting ready to win at the next level.”

Mike Venosa wanted to mention a number of people.  “I want to thank pretty much my whole Victor team, ever since 7th grade, my high school coaches [Craig] Kaper and [Ian] Ammons and Ed Schafer (Superior Wrestling coach), who coached me since 6th grade. Mr. [Ilias] Diakomihalis helps me a lot, so do all the Hilton guys. I want to thank my parents for everything they’ve done and my brother, who still wrestles with me sometimes.”