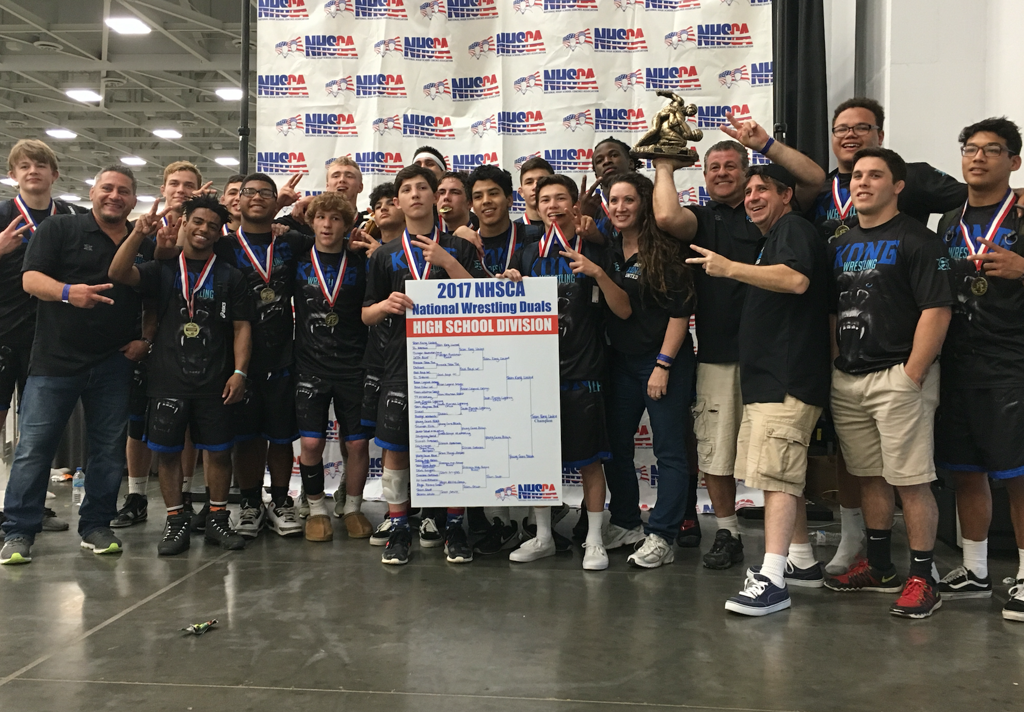 For the second straight year, Kong United navigated a difficult field to capture the NHSCA National Duals championship in Virginia Beach … and it all had a familiar feel.

That’s because for the third consecutive time, Kong United met Young Guns Black in the finals and once again the championship came down to the very last match at heavyweight.

“We’re still in the glow right now,” said coach Anthony Ciolino. “I just can’t believe it. The repeat makes it feel really good. Same team, same situation. I don’t think I could’ve taken it if it went into overtime.”

Kong United was loaded with top wrestlers from New York and around the country and Ciolino felt confident in the team’s chances of reaching the top of the 188 team tournament. However, an injury to #1 Daton Fix right before the event began added a new challenge.

“We didn’t have another guy to step in at 126 and at first, we were thinking, how are we gonna win a national title forfeiting a weight class?" Ciolino said. “But these guys stepped up. They said one person doesn’t make a team. They got pins when we needed it; they got bonus points when we needed it and they won it.”

In the title bout, the score was knotted at 9 after four matches, with Brandon Kaylor (decision at 106) and Eastport-South Manor’s Adam Busiello (pin at 120) putting points on the board for Kong United.

“If we don’t get that pin from Busiello in the finals, we don’t win,” Ciolino said. “That was a huge pin from Adam.”

Alex Felix made it 13-9 Kong with a major at 132, however, Young Guns prevailed in the next three contests to take an 18-13 advantage.

“Zack was a hammer the whole weekend,” Ciolino said. “He went undefeated and beat two or three ranked kids in the country. He showed how good he is.”

After one-point wins by Young Guns at 182 and 195 made it 24-19 in favor of the Pennsylvania club, Kong United needed points at the last two weights and got a decision from Cade Belshay at 220 to make the score 24-22 with one bout remaining.

With the outcome on the line, Sammy Evans came to the mat for Kong United against Young Guns Black’s Isaac Reid, a PA state runner up.

“Sammy Evans is the nicest kid you ever want to know,” Ciolino said. “He looked at me and said, ‘Coach, I got this. I can beat this kid.' Our big guys came through in a big way.”

After two scoreless periods, Evans picked up a reversal on the way to a 2-1 victory, which brought the championship back to Kong United.

The team picked up where it left off on Sunday morning, breezing by Team Menace 65-3 before topping Michigan Revolution Gold 47-12.  That led to a meeting with Bad Boyz Wrestling Club in the quarters.  Kong United continued to roll with a 56-12 triumph and followed up with a commanding 42-18 victory over South Florida Lightning in the semis.

In that semifinal, Kong United fell behind 18-3 before two-time NYS finalist Jake Silverstein of Hauppauge got the momentum going with a 2-0 win at 138 pounds.

“Silverstein beat at least three ranked kids in the country during the tournament," Ciolino said. "He wrestled like a beast and went undefeated until he lost to [PA state champ and Iowa recruit] Max Murin in a match that came right down to the end.”

In the next bout of the semis, Domonick Demas picked up a first period pin and 2017 New York state champ Peter Pappas recorded a 3-1 decision over multi-time Florida titlewinner Jake Brindley to close to gap to 18-15.

"Pappas was a hammer," Ciolino said. "He beat at least four state champions over the weekend."

Hayden Hastings earned a 1-0 victory to tie the score before John Glenn state runner up Zack Ancewicz gave Kong the lead with a 7-0 win. The squad then registered three straight pins and a decision to clinch a spot in the finals.

“Before we went into the finals, we had just five total contested losses,” Ciolino said. “That’s crazy.”

“Brandon Nunez did a fantastic job,” Ciolino said. “I think he lost just one match. Redding bumped up for us and wrestled very well - went undefeated. Really, all the kids stepped up this weekend like I cannot believe. 188 teams and we wound up winning. I don’t even know what to say. The kids melded so well together. In the end, they were like brothers.”

So what’s next for Kong United?

“Young Guns won two in a row. Now we’ve done it,” Ciolino said. “A three peat? No one’s ever done it. I guess we might as well make history.”

Thank you to Kim Leo McClaugherty for all her help!