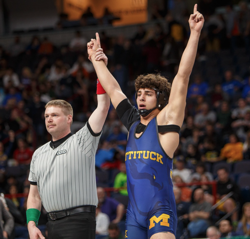 Tanner Zagarino describes it as “having a totally separate life.”

On the one hand, he’s a model and aspiring actor who has walked the red carpet at events like the American Music Awards.  On the other, he’s a state champion wrestler who helped lead Mattituck to the top of the Division 2 dual meet state rankings the past two years as well as a second place finish at the 2017 NYS tournament.

At one time, he wasn’t sure how it was all going to fit together.

“A few years ago, I was just okay at wrestling,” he said. “All the other things I had going on - modeling, acting, instagram - was a huge thing for people to make fun of. They would say, this kid sucks at wrestling, he should just focus on the other stuff. The things I was doing were on two totally opposite ends of the spectrum. People would say, he’s a model and a wrestler. But they had that twisted. It’s the other way around. I worked really hard to be a good wrestler and never let anything else get in the way. Now, they can’t really say anything.”

They could say he is the second state champion in Mattituck history (by a few minutes), who racked up a 42-2 record in his senior campaign without any losses at his championship weight class of 220 pounds.

Prior to the 2017-18 season, Mattituck never had a wrestler make the NYS finals. However, four Tucker wrestlers earned spots this year, with Jack and Luke Bokina both notching second place finishes during the first part of the championship round.

“I’ve been wrestling with James since we were little,” Zagarino said. “James was a stud even as a kid; I was a late bloomer. Sometimes when you wrestle the same guy every day, you don’t get as much out of it. But we tried different styles; always made each other better. We never gave each other a break; never let the other person slack. I’ve probably wrestled 1000 matches with James.”

So although coaches told Zagarino to prepare for his own championship bout (which would be right afterwards) and avoid sneaking peeks at Hoeg’s finals match, Zagarino couldn’t keep himself from watching as Hoeg recorded a major decision and earned Mattituck’s first-ever state title.

“My coaches were trying to keep me away, but I was right next to the mat,” Zagarino said. “I almost forgot I was going to wrestle next. After he won, I was like, ok it’s my time. Sometimes I have problems with overthinking before my matches, but after watching James win, I was probably the most confident I’ve ever been going into a wrestling match.”

After three consecutive pins earlier in the tournament, Zagarino recorded a 10-5 victory over Hammond Raes of Midlakes to capture the 220 pound crown.

“I was obviously super excited, but probably more than anything it was like a weight off my shoulders,” he said. “When I could only beat okay guys when I was younger, my dad told me maybe one day I could be a state champ. I didn’t really believe it until my coach [Cory Dolson] gave me no choice but to believe it. Throughout my career, I was wondering if I was gonna get to that level. It still doesn’t seem real sometimes.”

When interviewed after the match, Zagarino said he was interested in continuing his college career at Pittsburgh.  The Panthers had shown interest prior to his senior season and he had taken a visit to the campus. However, head coach Jason Peters was let go in January and Zagarino's plans became much more uncertain.

“Pittsburgh was the first Division 1 college to be interested in me,” he said. “It was my first visit and the team was so cool and inviting and I loved the atmosphere. I really liked the way the coach talked about the program. But then he was fired. It was a nightmare. I visited some other places, but when Keith Gavin was hired as the new head coach [at Pittsburgh] and we talked, I really liked his attitude and the things he said. It feels like the right program for me. They saw my potential before my name was on the map. I’ve had a good relationship with [assistant coach] Drew Headlee throughout the whole process. It became almost a no-brainer for me.”

So, although he also considered Ohio University, Virginia Tech, Northern Colorado, NYU and Cortland, Zagarino’s future destination has been determined.

He plans to major in film. So with his modeling and acting interests, did he ever consider ending his wrestling career after high school?

“It was definitely a question,” Zagarino said. “Wrestling becomes a lot to deal with sometimes, especially when you’re losing weight. I could be doing something totally different. But I don’t think I could live without wrestling. I wouldn’t be as happy. After I won the state title, I knew I wasn’t done. I knew I wanted to wrestle more. You’d think you’d be satisfied with a state title and that could be it. But I didn’t feel that way. I know I have a lot more wrestling in me. I haven’t peaked yet.”

Tanner Zagarino said, “I want to thank the Hoeg family for the kid program that started us all off and training partner James Hoeg. I want to thank my dad Frank Zagarino and everyone in my support system. Special thanks to Cory Dolson for doing so much as our coach and pushing us to where we are.”