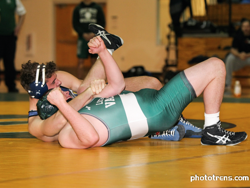 That was the combined score for Mattituck’s James Hoeg as he dominated his way to the 195 pound Division 2 state championship a few months ago in his fourth appearance at the Times Union Center.

“Being there before helped a lot,” Hoeg said. “The arena can be pretty intimidating at first. Getting used to it takes a little bit of time. I learned from my mistakes, especially from last year [when he took fourth at 170]. I shied away from scoring then … I tried to win close matches and it didn’t work out in my favor. This year, I just focused on scoring a lot of points so there wouldn’t be a doubt in the end.”

There wasn’t any doubt as he registered technical falls in his first three matches before recording a 10-2 major over returning state finalist Joe Benedict of South Jefferson/Sandy Creek in the title bout.

While Hoeg had competed in Albany at 145, 160 and 170 in the previous three years, he spent his 50-2 senior campaign at both 182 and 195 before deciding on the higher weight prior to the postseason.

“During the season, I just went where the team needed me most,” he said. “But for the state tournament, I felt better at 195. I didn’t have to lose any weight at all; I was just healthy and full of energy and it paid off.”

Not long after earning the title, Hoeg took a visit to State College, Pennsylvania.

“I was just looking for a balance of wrestling and academics,” he said, noting that his decision came down to Penn State and Maryland. “The campus was super nice and you can’t go wrong with the wrestling facility and the coaches. I went to see a practice and watching all the guys on the team was just crazy. I want to get as good as I can in wrestling and Penn State is the place to do that.”

The future 197 pounder has been part of a championship team throughout his high school years.  Mattituck captured five straight Suffolk County Division 2 crowns and was named the New York State dual meet co-champions with Central Valley in 2017. [The squad also nabbed second at the state tournament with 99.5 points].

“It was definitely special,” he said. ”Going into this season, we knew this was the year we had the capability of doing so many big things.  Our starting lineup has been wrestling together since fifth or sixth grade, so we’ve become a family over the years.”

That family came into the 2016-17 campaign without ever having a state finalist. That changed in a significant way, as four Tucker wrestlers made the Saturday night championships this year, with Hoeg emerging as the school’s first ever champion.

Then, a few minutes later, 220 pounder Tanner Zagarino made it two gold medals for Mattituck.

“It was in the back of my mind when I was wrestling that we never had a state champion before, but really I was just looking to be a state champ, whether I was the first or the last; as long as I accomplished my goals. It was special when Tanner won after me. We’ve been wrestling together probably since third or fourth grade. We work out together all the time and it was special seeing it all pay off for both of us in the end.”

So Hoeg captured a title to finish his high school career.  He’ll look to add to that on both the team and individual levels with the Nittany Lions.

James Hoeg said so many people have helped him over the years in the sport. “Coach Cory Dolson’s been coaching me since I was little. I owe a lot of my success to him. Tanner [Zagarino]’s been a great workout partner and there have been other kids that have graduated that pushed me every day too.  My dad has been a coach and a very important part of my success. He brought me everywhere to the best practices. I want to mention the Rocky Point coaches - Darren Goldstein, Anthony Volpe, Billy Coggins, Anthony Ciolino. They’re nice enough to invite me to work out with them … so many people came together and helped me be a state champ.”