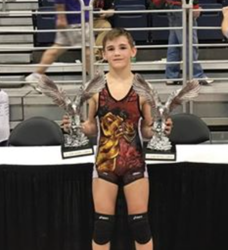 Carter Schubert left the NUWAY Nationals in Michigan over the weekend with two more championships - at 92 pounds in Division 5 and at 90 pounds in Division 4.  He has made the finals at this event every year since 2013, with crowns in each of those events except 2014.

Ruthless Aggression also saw Lucas Maneri take the top spot in his bracket - Division 1, 40 pounds with a pair of pins and a major.

Also emerging as a champion in Division 1 was Ely-Jah Maye at 62 pounds, with two falls. 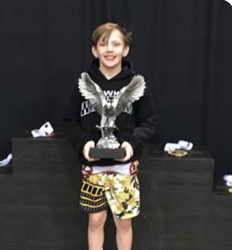 Kole Mulhauser of TSWA wrestled Saturday in Division 4 and took second. Then, on Sunday, he competed up in Division 5 and brought home the title at 101 pounds with two pins along the way.

New York also saw a lot of success in the girls action.  Slingshot Wrestling Club was represented on the top of the podium by Joye Levendusky (High School, 140) and Esther Levendusky (Middle School, 92). Both registered a technical fall.

Meanwhile, Emily Sindoni of Tioga Lady Tigers earned first in the 11 and Under heavyweight division.  On her championship run, she notched a tech fall and a pin.

In 9 & Under action, TSWA's Baylee Williams came out on top as did Teegan Sibble of Tristate Warriors at 58 pounds.  Williams won her last two matches by pin, while Sibble had three bonus point victories in her winning bracket.

Katlin Wells was victorious at 130 pounds in the high school action after four falls.