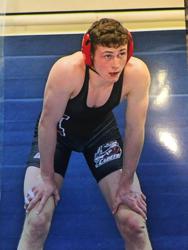 Courtesy of A. Hertel

As a sophomore, Hilton’s Austin Hertel came tantalizingly close to the state finals, falling in multiple overtimes to eventual champion John Arceri of Huntington in the semis 113 pounds.

In 2017, in his senior campaign, he was looking to overcome that semifinals hurdle and wrestle on Saturday night.

“I didn’t do as well as I expected last year [2-2 in Albany],” he said. “After that, I really made sure I did everything right to reach my goal of being a state finalist and champion. I limited distractions and went out there like I deserved to be at the top of the podium. It sounds cliche, but I wanted to make sure I left everything on the mat in every match because I wanted to know that I gave it everything I had.”

He lost just one regular season match to a New York wrestler (Wantagh’s Justin Vines at the Eastern States) and began his run at the Times Union Center with a 7-1 decision over Andrew Davis of Wallkill.

Hertel then faced undefeated returning state placer Ben Tepperman of Hauppauge in the quarters and prevailed 1-0.  In the semis, he once again earned a 1-0 decision with a tough ride and an escape point, this time over Stefan Colbert of Indian River.

“Those 1-0 matches were definitely harder on my family than on me,” he said. “There were certain times during those matches that I was tired.  I had to dig deep and leave everything out there. I was telling myself -  quit being a baby and just do it. I don’t consider myself great on top but I can get a rideout if I need to.”

And he did to ensure the final six minutes of his high school career would be in the state championship bout.

“A lot of people have asked me about having my last match be in the finals,” he said. “It was a surreal experience. To be honest, it was different than any match I’ve ever had. Sometimes I’m nervous before matches, but for some reason, I was all smiles. It was great to be a part of it - down on the floor, the crowd, the cameras, the lights. It’s easy to get caught up in the moment but nothing bothered me. At the end of the day, it was an experience I won’t forget.”

Hertel fell to Vines 3-0 in the title bout.  But for the fourth straight year, he and the “Core Four” of Yianni Diakomihalis, Louie DePrez, Mike Spallina and Hertel won the Division 1 team state championship with Hilton.

“Honestly, being a part of this over the years has been incredible,” Hertel said. “I grew up with those guys. We saw lots of success together but we also went through hardships. Bonds are formed in adversity and we formed a brotherhood. It’s not just friendships - it’s family.  Winning four state championships was incredible but it’s even cooler to be part of a group of brothers that go through the ride together. I’m really grateful.”

He’s even grateful for some of the close losses.  When asked about the most memorable event of the past several seasons, he mentioned the Union-Endicott Duals, a tournament in which Hilton lost in the final match in 2016 to Long Beach in a thrilling battle that came down to the last seconds.

“We never won that tournament, as many heavy hitters as we had,” he said. “It was the one goal we didn’t accomplish. But it’s such a memorable place. The best teams in the state are there and there’s so much yelling and intensity and everyone is on the edge of their seat in every single match. There were so many emotions left out there and that’s why UE Duals was the most memorable.”

He’ll be looking to start some new memorable experiences as he continues his wrestling and academic careers at Gannon University, where he expects to wrestle at 125 or 133 pounds and study biomedical science.

“After taking a couple of visits to Gannon, I got a really good feeling,” he said. “I stayed with the team and felt really comfortable and really liked the academic program - it’s what I was looking for school wise. I’m really excited for the next step.”

Austin Hertel had some people he wanted to thank.

“Of course my mom and dad. I’ve been lucky to have support from all over the place. Also, Ilias Diakomihalis. He never had to take us all into the Garage, but he did and he treated me like one of his kids. It’s been special to have a relationship with him.  Yianni [Diakomihalis], Louie [DePrez] and Mike [Spallina] - my brothers. Adam Burgos and really the Garage as a whole, everyone there, has been instrumental for me. Thank you to my coaches at Hilton - Craig Gross, Tristan Hamner, Chuck Giordano and Nate Smith, for everything they did for me.”