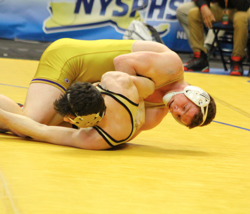 Warwick's Ryan Ferro is about to become a year round wrestler again ... for one of the top college programs in the nation.

Since he's been in high school, Ferro has wrestled in the winter — and not otherwise.

That three-sport schedule hasn't stopped him from being a two-time Division 1 wrestling state champion (152 pounds in 2016 and 160 in 2017), who won more than 45 consecutive matches to finish his high school career.

It was clear from the start that he was going to make an impact as he was a Section 9 finalist in seventh grade.  As a freshman, he captured the first of four Sectional titles, punching his ticket to the NYS championships.

"Going to the state tournament for the first time, it was an incredible experience," he said. "Walking out from underneath the stadium into the arena, it was like going into the colosseum with gladiators. It was so big, with so much to take in."

The freshman wrestled like he belonged, despite being the only non-junior or senior in the 152 bracket. Ferro won a pair of bouts, falling one victory short of the podium.

"I was so close to placing," he said. "It fueled me for the next year."

When he returned to the Times Union Center as a sophomore, he once again impressed, this time earning third in a strong 145 pound class.

"The kid I wrestled in the semifinals was the one who won it [Tommy Dutton]," he said. "He was extremely good - he manhandled me. I had to prove something to myself, to wrestle back and get third. I went out there and wrestled as hard as I could and won the rest of my matches."

That finish put him on the radar as a state title contender as a junior at 152, with nationally-ranked Chris Mauriello of Hauppauge [now at Old Dominion] also at the weight.

"I felt like I prepared extremely well,” he said. “All my training was based on getting ready for Mauriello. It made me train even harder. I went into that tournament feeling the best I felt all year.”

He wrestled that way, recording two pins and a technical fall in his first three bouts to earn a spot in the finals against Justin Klein of Rush Henrietta, who got his hand raised against Mauriello in the semis.

In his first championship appearance, Ferro wasted little time, registering a fall in 1:49 to grab the state crown.

“The whole tournament was unreal,” he said. “I would get off the mat every time and be like, ok, that went well, on to the next one. When I won by pinning the kid in the finals, that felt incredible.”

Ferro said that the expectations made things a little bit different heading into his senior campaign as a returning champion.

However, he still cruised through his first 16 bouts, winning all but one by either fall or forfeit.

In the title match of the Shoreline tournament, Ferro faced off with Brewster’s Grant Cuomo in a clash of New York Wrestling News’s top two 160 pounders in the state.

Cuomo notched an early takedown and back points for a 4-0 lead, but Ferro rebounded to pin Cuomo in the second period.

“After that match when we shook hands, I gave Cuomo a hug because that was the closest I’ve been to getting pinned in a long time,” Ferro said. “I told him I would see him again in the state finals.”

Cuomo got on the board first again in Albany with a takedown, but Ferro wasn’t concerned.

“I felt comfortable,” he said. “I just stayed focused. I adjusted and was able to counter his leg attacks and put him on his back.”

Ferro notched a 7-3 decision for his second straight title.

“There were a lot of things going through my mind after the match was over,” he said. “A lot of emotions. Right away, I thought, wow, it’s insane that I won again. Then I started thinking about the people who helped me, who did everything for me and I ran into the stands to celebrate with them.”

Among the people Ferro credits for his success were his parents and his Warwick coach Phil Szumlaski. He also mentioned Rick and Nick Scarpulla, who “helped me get a lot stronger and mentally tougher.”

That will help him tremendously as he transitions to the Big 10 conference at Ohio State University.

After visiting Columbus over the weekend, Ferro gave his commitment to head coach Tom Ryan and the Buckeyes.  (He also considered Maryland, Edinboro and North Carolina State).

“It was a really nice campus,” he said. “The coaches were really funny and very committed to what they want to accomplish. The wrestlers were great ... the types of guys I want as teammates. I fell in love with the school.”

He said he feels that way about Warwick as well.

“I love representing my school,” he said. “I take a lot of pride in going to Warwick. Having Warwick on my singlet was incredible. I’m also happy that I was part of showing everyone that Section 9 is a great section.”

The first back-to-back New York State champ in Section 9 in about a decade (Lou Ruggirello was the last), Ferro said he will likely compete at 157 pounds at the next level and as of right now, doesn’t plan to redshirt in the 2017-18 season.

“Right when baseball ends, I’m gonna go straight into wrestling,” he said. “I’ll be doing a lot over the summer to get ready to wrestle at Ohio State. I’ll be in the same room with guys like Kyle Snyder, Nathan Tomasello, Myles Martin, Bo Jordan and Micah Jordan. I can’t wait.”