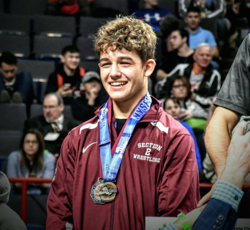 After falling behind against three-time state placer Kyle Mosher of South Side, Gramuglia came back in the final seconds of the bout to earn a 6-5 decision ... and third place at the state tournament at 138 pounds.

"After wrestling [Mosher] at Eastern States [in a 3-1 Mosher win], I felt like I had the skill and talent to beat him," Gramuglia said. "When I was down really late in the third, I just felt it within me and kind of pulled off a miracle to be honest. There were 12 seconds left when I took him down. It was my last high school match and I basically just wanted to end on a win."

The Burnt Hills senior certainly expected to finish high on the podium after grabbing fourth as a junior in Albany at 132.  However, after compiling a 43-2 record coming into the state tournament, his opening match at the Times Union Center didn't go exactly as planned, as he was upset by Smithtown East's James Trezza.

"After losing the first round, I was really mad that I got upset," he said. "Losing to an unseeded kid -- that probably shouldn't have happened, but he is a very good wrestler. I felt like I had to get more focused and be more prepared for my next matches."

The Section 2 standout got to work in the consolations, shutting out his first two wrestleback opponents by a combined 11-0 score.

He then defeated Cory Guinta of Webster Thomas 10-6 before defeating Trezza in overtime to avenge the earlier result.

"I was definitely happy to have another chance against him," Gramuglia said. "We had a couple of words after the first match, so to wrestle him again was a good feeling, especially after I won."

That victory led to the bronze bout and the victory over Mosher.

Gramuglia completed his high school wrestling days with five straight wins at the biggest tournament of the campaign.  But his experiences on the mat are far from over.  The Burnt Hills wrestler recently committed to Oswego, where he looks to compete at 141 or 149 pounds.

"I like Oswego; they have a really good business program," he said. "In the past, I didn't know if I wanted to wrestle or play golf in college. This year made me feel like wrestling is just in me and I really want to do it."

His high school career certainly ended on a high note.

"Coming back and taking third was a pretty big accomplishment," he said. "I was fourth [as a junior], so I wanted to finish better than the previous year."

Now, he'll have the chance to go even higher on the podium ... at the next level.

Christian Gramuglia said, "all my coaches were really instrumental in my career, especially Frank Popolizio, Steve Jones and Ron Ashcraft. They helped me throughout the years and put a lot of time and effort into me. I want to thank all my practice partners, ever since my seventh grade year. Guys like Josh Logiudice and so many others. The kids I drilled with worked hard and made me better."