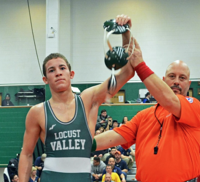 Another competitor from Long Island will join them next year -- Locust Valley's Jonathan Gomez.

Gomez recently captured a title in dominant fashion at the Eastern States Classic at 126 pounds and is ranked #1 in the state at that weight.

The Nassau senior won a NYS championship in 2015 and is a three-time placer and two-time finalist who nabbed third at 120 last season.

Gomez's accolades extend beyond the state borders, as he was an NHSCA Sophomore Nationals champion and twice made the podium at Fargo in Freestyle.

The National Honor Society member expects to compete at 133 pounds for the Tigers, joining a recruiting class that includes Empire State wrestlers like Conor Melbourne of John Jay Cross River and Kendall Elfstrum of Monroe Woodbury.

We'll see what additional achievements Gomez adds to his resume before leaving for New Jersey.