Two in a Row: A Look at Long Beach's Second Straight U-E Title 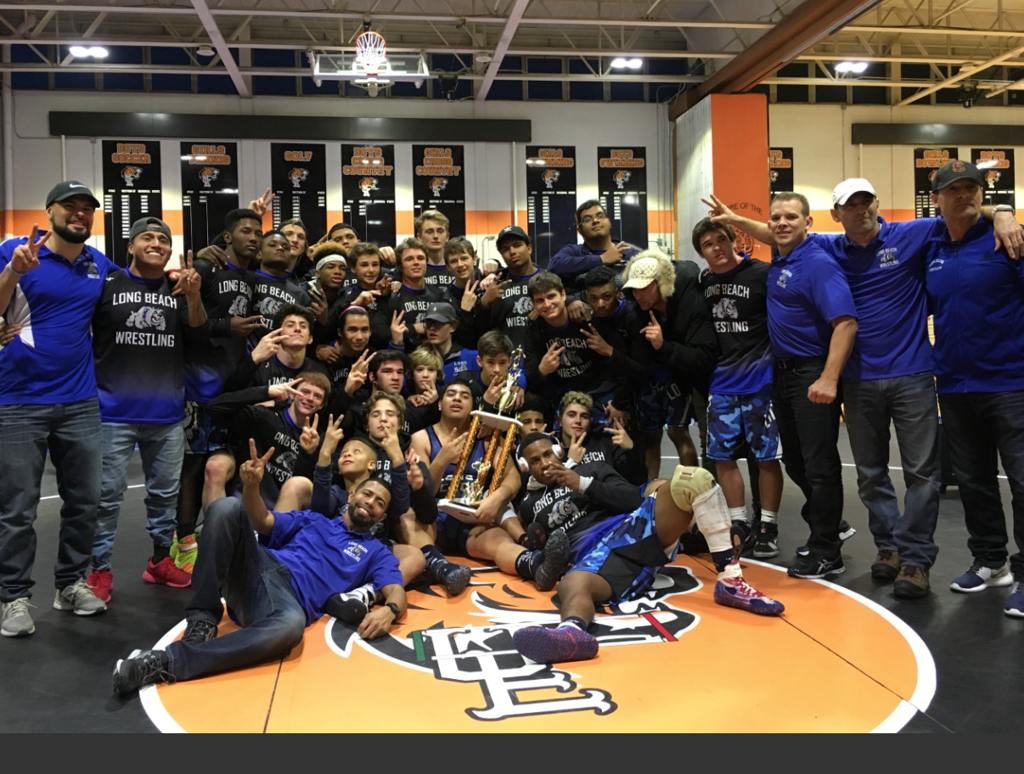 For the second straight year, the Union-Endicott Duals championship came down to the final bout.

In 2016, Mark Rivera came up big for Long Beach, earning a victory with a last second takedown to secure the championship for the Marines.  On Sunday, it was Jeffrey Alvarez’s turn.

The scoreboard read Long Beach 33, Rocky Point 30, with Alvarez of the defending champion Marines set to take on Leo Burke of Rocky Point at 285.

“I have a lot of faith in Jeffrey,” said Long Beach head coach Ray Adams. “He’s an undersized 285 pounder, but he’s very gritty; very determined. Going into the match, I felt really good."

Alvarez had a takedown in the bout, but gave up a reversal. After regulation, the score was knotted at 3.

There was no scoring in the first overtime in neutral. Then, Alvarez took the bottom position.

“He rolled and headlocked him and put him on his back,” Adams said. “Then, in the second half of rideouts, [Burke] chose top but Jeffrey held him off and that was it.”

So, in a dramatic overtime finish, Alvarez prevailed and sent Long Beach to a 36-30 triumph, which made them the Union-Endicott champs for the second year in a row.

“It was very exciting,” Adams said. “If we had lost that last match, we would’ve lost the dual on criteria because of the disqualification [at 152]. I didn’t know if anything could top last year, but holy mackarel, this year was right there.”

The finals began with Pablo Martinez putting Long Beach on the board first with a decision at 99. However, Rocky Point then reeled off four straight victories to take a commanding 21-3 advantage. Logan Sciotto (106), Anthony Sciotto (120) and Anthony Cirillo (126) recorded pins during that streak, with Evan Matias adding a decision at 113.

“Pablo Martinez’s win at 99, that was big. Still, we were in a hole, but we weren’t surprised that we were behind at that point,” Adams said. “Our kids, they believe. They stay focused and believe that good things will happen.”

Good things did start to happen for Long Beach. Three-time state champ Jacori Teemer registered a pin at 132, followed by a decision by Matt Maquet at 138 and a technical fall from John Colletti at 145 to close the gap to 21-17.

Rocky Point’s lead was extended to 27-17 when an illegal slam was called on state qualifier Charlie Spada of Long Beach, putting six points on the board for Joe Genova and the Suffolk squad.

But, Long Beach once again bounced back. Tyrese Byron won at 160, Tyreek Bromley picked up a major at 182 and Elijah Rodriguez registered a fall at 195. (Anthony Lucia earned three points for Rocky Point at 170). Mark Rivera then got his hand raised at 220 to give the Marines their first lead since the opening bout of the dual.

“We were confident we would get things going,” Adams said. “Jacori Teemer was back this weekend and he really ignited the team with a couple great pins. [John] Colletti had some big bonus points. I think he could win our section this year and do well upstate. [Tyreek] Bromley sealed the deal in the semis and Elijah Rodriguez is just a pinning machine. I could go on and on. Our guys overall responded.”

The dramatics weren’t limited to the finals for Long Beach.

The semis against fellow Nassau power Wantagh followed a similar pattern as Long Beach overcame a sizable deficit and clinched the victory in the last bout.

In that dual, Wantagh was up 23-6 after seven matches with five straight wins in the lightweights.  A Teemer pin at 132 once again turned the tide, although Justin Vines defeated Matt Maquet in a battle of state placers at 138 to extend Wantagh’s lead to 26-12.

However, Long Beach took five of the last six, with the exception being a victory by Jonathan Loew of Wantagh over Tyrese Byron at 160 in a clash of two wrestlers sure to make noise in the postseason.  John Colletti (technical fall), Charlie Spada (technical fall), Brandon DeVivio (decision) and Joe Giorlando (decision) all won in the middle to upper weights to make it 29-28 Wantagh going into the finale at 195 pounds. In that match, All-Stater Tyreek Bromley earned the major - and sealed the 32-29 win.

Wantagh responded with a 40-31 decision over Mattituck for third place.  Mattituck had defeated Hilton in pool action on day one.

Grabbing the fifth spot was Minisink Valley, with a 39-28 win over Hilton, while Monroe Woodbury nabbed seventh after topping Fairport.

“I’m very proud of the kids, it’s quite an accomplishment,” Adams said. “With all the great teams that were there, any of those matches could’ve gone either way. Rocky Point and Wantagh are both outstanding teams and programs. To me, this weekend was high school wrestling at its best with all the teams involved. Dual meet tournaments bring so much excitement. We’re very happy with the outcome. The kids work hard and it’s exciting to achieve some of the goals you set. There’s certainly a lot more we’re looking forward to.”