Back in December, Section 1 and Section 9 crowned dual meet champs  in Division 1 and Division 2.  In mid January, Section 3 did the same.

Over the past few days, a number of other Sections held their championship dual events. Read on below to see who came out on top in Sections 4, 6, 8, 11 and the CHSAA during the last weekend in January. 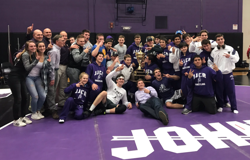 Repeat champions were the theme in Section 1 this year, as John Jay Cross River dominated on the way to a second consecutive Division 1  dual meet title.

The squad rolled past Arlington, 60-15 in the semifinals, before a commanding 57-13 victory over North Rockland in the championship bout.

JJCR won 11 of the 15 individual matches, with 8 of those by bonus points.  Registering pins for the winning squad were Chris Cook, Eric Eberhart,  Halil Gecaj and state placer Conor Melbourne. In addition All-Stater Evan Frank picked up a technical fall, as did Louie Cree at 132.  Bim Gecaj received a forfeit, while Ray Cotto earned a 13-0 major.

For the second straight year, Pearl River bested Putnam Valley to capture the Section 1, Division 2 dual meet championship. This time, it was a 57-26 victory on Wednesday night.

The squads traded pins early on in the dual that began at heavyweight. Putnam Valley's Constantine George and Hunter Lundberg recorded falls as did Pearl River's Matt Shaw and Brian Roberts.

Then, it was Putnam Valley that went on a run, with state qualifiers Mikey Bruno, Satoshi Abe and Kyle Sams rattling off three straight wins. (Congratulations to Abe on his 100th career win).

However, a turning point came at 138 when Pearl River's Emett McCann registered a pin late in the third period to draw his team to within 26-24 on the scoreboard.

State representatives Sean McGarvey and Anthony Malfitano kept the momentum going from there and with several forfeits and a triumph by Dan Hogan, Pearl River emerged as the top small school dual squad in Section 1. 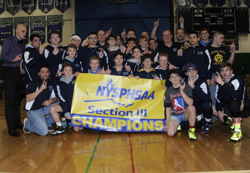 Central Valley continued an outstanding season, dominating on the way to the Section III Dual Meet championship in mid January.

In the finals, Central Valley recorded a decisive 50-15 victory over Fulton.

That led to the semis, where Central Valley again prevailed, this time by a 59-14 margin over Canastota.

Fulton notched victories over Syracuse Institute of Technology (70-12), Liverpool (63-12) and CBA/Jamesville-Dewitt (47-21) on the path to the title contest.

Bainbridge-Guilford/Afton/Harpursville (BGAH) took second at the Section 4 Dual Meet championships in 2016.  This year, the squad made the finals again and finished on top with a 40-36 victory over Horseheads.

BGAH trailed by two heading into the final bout at 145 pounds, but Ben Bivar delivered a pin after building a big lead.

Falls were the story early for the squad, as BGAH began the title match with three in a row from Hayden Lewis (152), Shane Hoover and Madison Hoover to start with an 18-0 advantage.

Austin Carr also added six points for the team with a fall, while Brody Oleksak notched bonus points with a major. Two of the biggest triumphs were highly contested decisions, as Cody Ferrara upended Wesley Woodworth at 132 and Mitchell Weist topped LaDarron Tutten by a point on a late takedown in a meeting of two highly regarded Section 4 upperweights.

Horseheads received falls from state qualifiers Chris Eames, Devin Woodworth and Jacob Scibek, as well as from Jarrett O'Connell and Calum Houper. In addition, Andrew Panaski and Jesse Johnson got their hand raised.

To advance to the finals, BGAH defeated Chenango Valley and Tioga, while Horseheads beat Newark Valley and 2016 Section 4 champs Vestal (the latter in a one point dual). 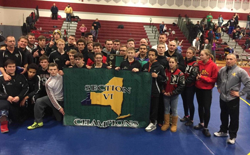 Niagara-Wheatfield and Pioneer became the first-ever Section 6 dual meet championship teams ... and they did it in dramatic fashion.

In the large school competition, Niagara-Wheatfield came from behind to win in the quarters (by one point over Grand Island) and in the semis (overcoming a 35-15 deficit midway through the dual against top-seeded Clarence).

In the finals, Lockport held a two point advantage going into the final bout.  State ranked Matt Cicco then recorded a fall, sending Niagara Wheatfield to a 39-35 victory and the title.

It was a back and forth meet, with neither team winning more than three matches in a row.  Niagara-Wheatfield took seven of the 15 bouts, but pins from Cicco, Zachary Lloyd (99), Jacob DeWolf (126), Warren McDougald (132), Joshua Thibeault (145) and David Runge (285) provided key bonus points, while Michael Ziegler prevailed at 160.

In a match of two wrestlers ranked in NYS, Mitch Seaver of Lockport avenged an earlier season defeat, topping Justin McDougald in overtime at 113. Also getting their hand raised for Lockport in the finals were Joshua Gill (106), Dontay Gill (120), Mark Cye (138), Steven Kapuscinski (152), Connor Regis (170), Steven Daskavitz (195) and Tyler Winslow (220).

Given the one-point dual between Falconer and Pioneer in late December, in which Falconer came out on top, a close rematch was to be expected.  And that's what happened in the Section 6, Division 2 Dual championship match.

After 15 bouts, the teams were knotted at 32, and Pioneer grabbed the championship on criteria of most matches won (8).  Three of the matches went to overtime, with Pioneer winning all of them.

Pioneer bested Fredonia and Olean by convincing margins in the first two duals of the competition to make the championship round.

Long Beach and Wantagh put on a show in the semifinals at the Union-Endicott Duals, with a down-to-the-wire match that was decided in the last bout.

The Marines won that one and defeated Wantagh in another thriller on Saturday in the Nassau County Dual Championship contest, 32-30.

The Warriors controlled the lightweights again, jumping out to a 21-0 lead after the first five matches on the strength of majors by Aidan Araoz, Charles Maier and Michael Killard as well as a pin by Josiah Encarnacion and an overtime decision by Christian Encarnacion.

Three-time NYS champ Jacori Teemer got Long Beach on the board with a fall, before Justin Vines beat Matt Maquet, 4-2, in a clash of state ranked wrestlers.

Long Beach then went on a run of four straight wins to pull within one point (24-23), with John Colletti and Charlie Spada recording majors, Tyrese Byron registering a pin and Brandon DeVivio earning a decision.

That led to a showdown at 182, where state ranked 160 pounder Jonathan Loew of Wantagh bumped up to meet 2016 NYS medalist Tyreek Bromley. Loew emerged with a hard fought 1-0 decision to extend Wantagh's advantage to 27-23.

However, Long Beach went back on top  with a pin by Joe Giorlando and a victory from Elijah Rodriguez to go ahead by five.  Gavin Casey ended the dual with a decision at 285 for Wantagh, but Long Beach came away with the 32-30 triumph.

Both teams cruised to the finals, with Long Beach besting Bellmore JFK, Garden City and Massapequa and Wantagh defeating Seaford, Uniondale and Farmingdale. 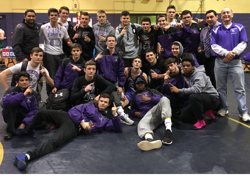 In a battle of two of the top teams in New York, Monroe Woodbury beat Minisink Valley 45-28 in the large school finals.

In a meet that began at 126, the Crusaders got off to a strong start, building a 24-4 lead after six bouts which included pins from Joe McGinty, Tom Fini and Evan Barczak. Minisink answered, however and pulled within a few points after 99 pounds, with falls by Tim Ganuncio, Andrew Covais and Nick Picariello.

However, Monroe Woodbury closed with three victories in a row -- falls from Dylan Earl and Ryan Burgos, followed by a decision by Marco Vespa over fellow state qualifier Tyler Lynch in a feature bout at 120.

Earlier in the evening, Minisink Valley defeated Washingtonville and Monroe Woodbury topped Wallkill to set up the championship showdown.

Also picking up a wins for the first place team was Matt Morris.

Rocky Point earned the Section 11 Dual Meet championship on Saturday, topping Hauppauge 37-31 in the finals.  The two squads met for the Suffolk Dual crown a year ago, with the same result.

The title team won eight of the 15 bouts, with pins within one minute from Evan Matias (106), Anthony Sciotto (113) and Anthony Cirillo (120) and another fall from Donald Hammarth at 138.  Rocky Point also received a major from Dylan Zabbara (160) as well as regular decisions by Anthony Lucia (170), Christian Stremich (195) and Matt Cappell (220).

Hauppauge had quite a few bonus point victories, including a pin from Dan Mauriello, technical falls by Jake Silverstein and Rich Dailey and majors by Ben Tepperman, John Munro and Darren Brophy. Luke Smith of Hauppauge topped Justin Amendola in a meeting of two of the top 99 pounders in Suffolk.

Rocky Point dominated on the way to the title contest, defeating Center Moriches, Mount Sinai and Connetquot by significant margins.

Hauppauge began by beating Half Hollow Hills West and Miller Place before besting #2 seed Mattituck, 45-27, in the semis.

Monsignor Farrell won the CHSAA State Duals, posting a perfect record for the weekend.  The host team last prevailed at this tournament in 2012.

In the final match on Sunday, Farrell took on St. Anthony's in a dual that began at 160. Mike Lanza, Jonathan Perez, Steven Roberts and Nick Romanello got their hand raised during the first six bouts for Farrell (while Colson Meadows and Maguire Horl won for St. Anthony's).

Monsignor Farrell went on to lead 25-8 after eight matches.

During the 113 pound contest, St. Anthony's forfeited the remainder of the dual. Antoni Walters, the St. Anthony's coach told SILive.com the following:

"All day long, there were no problems with the clock until we get to the final. That, and the official wasn't doing his job. I wasn't subjecting my team to this. But Farrell won. They did what they were supposed to do today. They wrestled their butts off."

(Link to the article is here).