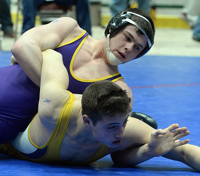 In 1995, Ballston Spa’s Terry Barnes wrestled in the state finals, taking second place at 215 pounds in a 4-3 decision.

Since then, no Scotties wrestler has appeared in the championship match at the NYSPHSAA tournament.

Terry Barnes’ son, Tyler, looks to change that as a junior in 2017 … and is a strong candidate to do so.

Tyler Barnes announced his presence on the varsity scene during the 2012-13 campaign, taking home Ballston Spa’s Most Outstanding Wrestling honors as a seventh grader.

“That year was pretty different for me,” Tyler Barnes said. “I was used to wrestling sixth graders, so it was a big change.”

It was a change he handled well with around 25 wins. And each year, he’s had a larger impact, making his first state tournament appearance as a freshman 160 pounder in 2015, in which he fell one win short of the podium.

“I never wrestled there before,” Barnes said. “I think I could’ve done better, if I wasn't as nervous.”

Last season, he took it to the next level, garnering All-State honors with a fifth place showing at 170 pounds. The campaign included a third place finish at the Eastern States Classic and wins over NYS medalists such as Jason Hoffman, Tyler Green, Matt Gaiser, Nunzio Crowley, Colin Derboghossian and Marcus Bisono.

“It helped a lot that I wrestled there before,” Barnes said of the state tournament. “It helped a lot with confidence. I still think I could’ve done better last year. I just made a few mistakes that I learned from.”

His mistakes since have been few and far between.

Barnes stepped into offseason competition and continued to make his mark.  He swept titles in both disciplines at the NYS Freestyle and Greco championships, then did the same, in dominant fashion, at the Southeast Regionals (three pins, five tech falls).

After those performances, what expectations did Barnes have for himself at the national championships at Fargo in July?

“I was just thinking I wanted to go in and place top eight,” he said.

He did notch All-American honors in both styles.  But Barnes went beyond just making the medal stand, earning a spot in the finals in Cadet Freestyle and Cadet Greco at 170 pounds.  On his way to the two title bouts, Barnes took the mat a combined 10 times … and totaled two pins, seven technical falls and one decision.

“Being in the finals - I kind of surprised myself,” Barnes said. “It was a totally different experience; it was awesome.”

Barnes left North Dakota with a pair of silver medals and his performance got the attention of numerous programs.

However, Barnes (the #1 ranked 170-pounder in the state) said he’s known for a while where he wants to spend his college years.

The junior made a verbal commitment to North Carolina State a few weeks ago, where he said he projects as a 184 or 197 pounder.

“I’ve been down there for a few camps,” Barnes said. “I think the first time I was there was my seventh grade year. I just really like the people and the coaching staff. They have everything I'm looking for and the support they have for athletes is great.”

He’s also excited about the excellent workout partners he’ll have to train with, mentioning Daniel and Thomas Bullard, Hayden Hidlay and Nick Reenan as some of them.

Now, Barnes spends a lot of time working with Jake Cook, someone “I've trained with since we were little kids.” In addition, he said coaches like Harvey Staulters, Kennon Englemann and Frank Popolizio have helped him tremendously, along with his parents.

Speaking of his parents, Tyler Barnes has known about his father’s state tournament finals appearance for years. On top of that, Ballston Spa hasn't had a wrestling state champion. Those are things on Barnes' mind in his 11th grade season.

“My goals this year are to win the state tournament and go undefeated,” he said. “It’s what I've been working for for 10 years. I remember my dad telling me about making the finals and I want to get there too and win it - to reach my goals I gotta try to beat him.”