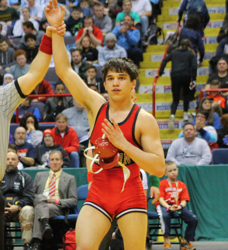 On February 11, 2012, Bryan Lantry, a then-sophomore from Wayne who was an NCAA qualifier for the University at Buffalo in 2016, recorded a 7-1 decision in the semifinals of the Section 5 state qualifier at 99 pounds. As one of many matches in the tournament, the result may not have registered as significant for those in attendance that day.

So why are we talking about it now? Because it was the last high school loss for two-time Cadet World champion and four-time NYS titlewinner Yianni Diakomihalis of Hilton, who was a seventh grader at the time. When we talked to him at the end of last season, Diakomihalis remembered the match clearly and was able to describe the scoring.

“It was 0-0 after the first and in the second, I got turned and then escaped, so it was 2-1," Diakomihalis said in the spring. "I went to run a bar in the third and got reversed to my back. I definitely learned a lesson, but I never got to wrestle him again.”

Fast forward a few years and the Cornell-bound senior is now the holder of the New York State record for consecutive victories, taking over the mark set by Ward Melville’s Nick Piccininni a few years ago.

In fact, Diakomihalis hit 200 straight wins in his first match of the 2016-17 campaign, with a 14 second pin over Lockport’s Chris Duncanson.

It was a pin that got the streak started back at the SuperSectionals in 2012. Diakomihalis got win #1 of his run with a fall in 4:58 over Penfield’s Parker Kropman, followed by a 4-2 decision over Jake Yankloski for third.

And since then, regular decisions have been rare for Diakomihalis. The results in trackwrestling show that in his sophomore and junior seasons, in over 100 matches, Diakomihalis had just one bout that didn’t end with him coming out on top by pin, technical fall, major or forfeit. That one exception was a 5-1 triumph by Diakomihalis over Jack Mueller of Wyoming Seminary, a wrestler who is so far unbeaten as a true freshman starter for the University of Virginia.

Even three of Diakomihalis’ four victories in the state finals have been by bonus, with a pair of majors and a pin.  And it’s been the same story this year.  In his 12th grade campaign, Diakomihalis has made quick work of his opponents, needing a total of less than 14 minutes of mat time to go 8-0 with 7 pins and a technical fall (over a returning state finalist).

We’ll see if Diakomihalis will once again bonus his way through the season … and how high he’ll set the consecutive wins bar before the end of his illustrious career.