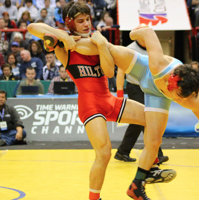 The outstanding Hilton seniors have experienced nothing but first place as a team at the New York state championships since their freshman campaign.

Will the Cadets add to their three-peat at the NYS tournament?  With tremendous firepower in the lineup, we predict that they will.

Only one team in New York has multiple state champions returning … and that’s Hilton with three (Yianni Diakomihalis, Louie DePrez and Greg Diakomihalis). Add placer Austin Hertel, multi-time qualifier Mike Spallina and several Section 5 medalists like Ryan Burgos, Sammy DePrez and Nate Whybra to the mix and the Cadets are sure to score big points in Albany. 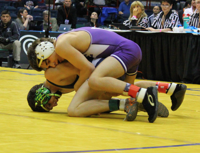 Let's take a closer look at some of these contributors.

In the lightweights, Greg Diakomihalis is back after earning NYS gold at 99 pounds as an eighth grader. The Super 32 runner up is moving up a few classes to 113, but Hilton head coach Craig Gross believes he’ll see plenty of success again.

“Greg has the goal of repeating and I expect big things out of him,” Gross said. “He wrestled really well at the Super 32.”

Joining him in the lightweights (likely at 126 by the end of the year), will be Austin Hertel, who has been All-State for the Cadets and looks to complete his high school career on the podium again.

“Austin dealt with an injury last season, but was right there at the state tournament,” Gross said. “He’s a very smart kid who developed into a really nice leader. The way he carries himself in school and in the practice room has been great for our program. If he ever has the inclination, he could be a great coach.”

Ryan Burgos notched third at the state qualifier a year ago and will be a threat at 99 pounds (although he will wrestle at 106 pounds during the season as well). Meanwhile, Rocco Camillacci will see some time at the lightest class as well.

“Ryan had a great first year,” Gross said. “He’s very dedicated - he goes all over and put in a lot of time in the offseason. I believe that will pay off at the end of the season. Rocco is also a very hard worker; I’m excited to see him go out there as a seventh grader and compete.”

Tyler Hodgson returns to the roster after wrestling in almost 40 bouts at 126 pounds for the Cadets as a junior, while Ryan Hinman will likely play a role.

The middleweights are, of course, anchored by four-time state champ Yianni Diakomihalis, who looks to become only the second-ever wrestler in the Empire State to win five golds. That would be yet another elite accolade for the two-time Cadet World Champion headed to Cornell.

“Yianni’s brought a greater awareness to our wrestling program,” Gross said. “In the room, it’s like having another assistant coach on the team. He’s obviously a phenomenal wrestler, but he’s also great at strategy for dual meets. We bounce ideas off each other, we talk about technique, he tells me what he thinks we need to work on in practice. He was away in Russia [a few weeks ago] and his sleep schedule was all thrown off, but you would never know it at practice. He was energetic, helping everyone as always.”

Gross said that experienced wrestlers like Josh Shamp and Tom Foos are likely to play crucial roles for the team, potentially at 152 and 160 pounds. 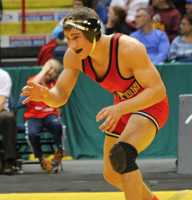 In the upperweights, Louie DePrez has stood on top of the medal stand at the Times Union Center two years in a row. The nationally-ranked Super 32 champ will be difficult to stop on his road to #3.

“Louie is very, very hard to score on and he has very good offense himself,” Gross said. “He was dominant last year and watching him in the room now, he’s stepped it up even a few more notches. He’s made big jumps even from a great season last year.”

“Mike’s been to the state tournament before and lost close ones to place,” Gross said. "This has to be his year. He had some injury problems leading into last season and he’s way ahead of where he was last year at this time. He’s very strong and athletic and he just keeps getting better.”

Another DePrez, Sammy, is a returning Section 5 runner up looking to make his debut in the state capital, likely at 170 pounds.

“Sammy had a very good year, taking second to state finalist Justin Klein at the state qualifier,” Gross said. “I see Sammy having a breakout season, getting to the state tournament and doing very well there.”

Like Sammy DePrez, Nate Whybra finished on the podium at the SuperSectionals.  A possible 220 or 285 pounder, Gross is excited about what he’ll bring to the mat in 2016-17.

“Nate really started coming on strong in the second half of last year,” Gross said. “He’s a very hard worker and picked up right where he left off after football. I have high expectations for him this year.”

While the Cadets have racked up trophies and achievements over the past few years, one thing they haven’t done is on their minds.

“We don’t really talk about the state tournament team title that much, but we talk about one of our goals of winning the UE Duals,” Gross said. “We lost a close match to a very good Long Beach team. It was a total team effort and our kids poured their heart into that match. Long Beach is very strong again and so are teams like Wantagh and many others.  It’s something we haven’t yet accomplished and our seniors really want to put that on their resume.” [Editor's note: Stay tuned for a look at the Long Beach squad].

With or without a Union-Endicott championship, Gross knows that this year will be another special one for the Section 5 squad.

“To be honest, it’s been phenomenal over the past few years,” he said. “I really want to slow down and enjoy this season. I just saw a picture of Yianni and Louie as seventh graders the other day - it’s hard to believe how fast it’s gone by. The great part is that the senior class - they’re not just great wrestlers but also great young men. I’m excited about this season.”