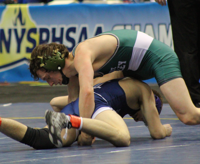 In 2014, then-freshman Hunter Dusold of Locust Valley made history, becoming the first-ever Division 2 Nassau County wrestler to win a state championship after he defeated Derek Spann of Adirondack for the 113 pound crown.

“I just want to make my mark in high school, so that title meant a lot to me,” Dusold said.

He wants to make his mark at the college level as well, and will look to do so at Columbia University after making a commitment to the New York City-based institution last week after also considering Virginia.

“First of all, I want to get the best education possible,” Dusold said. “I’m also excited to be close to home so my parents can watch me wrestle.”

His parents and accomplished wrestling family will still have plenty to watch during his senior season at Locust Valley.  Dusold is already a five-time Section 8 champion who has made the podium in Albany three times, including his state title, a fifth place showing in 2015 and a runner up finish at 126 pounds last season.

The future Lion said he will probably return to 126 for the upcoming campaign, where he has big plans.

“I’m really looking forward to this year and getting another state title,” Dusold said. “I want to hit 200 wins - I think I’m about 40 away.  I really want to try to get a team championship in my last year. That’s really important to me.”

It wouldn’t be the first team championship for the Falcons. In 2014, Locust Valley finished atop the Division 2 standings at the Times Union Center.  With another former state champ, Jon Gomez, in the lineup along with 2016 state qualifier Bailey O’Brien, the squad will be a factor at the end of the year.

“It’s been great being at Locust Valley. This year, as a captain, I feel I can help lead these kids and help them achieve their best," Dusold said. "I really believe there are a bunch of guys that can get on the podium this year and help us win as a team.”

If that happens, more Nassau County Division 2 wrestling history would be made.

Hunter Dusold mentioned a number of coaches that have helped him along the way, including Gregor Gillespie, Vougar Oroudjov, Joe Enea, Tim Bellisari and Anthony Abidin.