Mosca to Maryland: State Runner Up Chooses the Terps 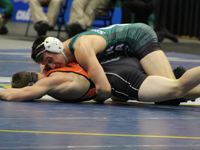 Shawn Mosca knew he had a big opportunity.

After winning his first two bouts at the Eastern States Classic in January, the Wheatley wrestler was set to begin the second day of the event with a quarterfinals matchup with multi-time state champion Alex Herringshaw of Holland Patent.

“I remember the night before that match, I told myself I was ready for that moment. There was nothing more I could’ve done in my training. I told myself I could beat him and I just wrestled my match and found my success in the areas I’m strong.”

He followed through, controlling a 7-3 victory over Herringshaw to move into the semifinals.

“Beating Herringshaw made me think that if things went my way, accomplishing my goal of being a state champ was reachable. At that moment, I knew all my work was paying off.  I lost to Jason Hoffman [of Hadley-Luzerne/Lake George] in my next match, so I knew there was still work to be done. But I believed I could win a state title.”

He certainly looked like he believed, coming out on top in the remainder of his bouts after Eastern States through the state qualifier in dominant fashion. In fact, every victory was by bonus points except one 6-0 decision. A quick pin in the Section 8 finals gave him his second chance at the NYS tournament.

His first trip to the Times Union Center as a 10th grader, didn’t quite go as he wanted.

“My sophomore year, I set a goal to win the county title and basically did everything possible to do it,” Mosca said. “When I got to states, it wasn’t like reality for me. It was just some big, crazy place. I was actually up 8-0 in my first match and lost.  I found myself in the wrestlebacks and lost again. It absolutely pushed me. It made me realize to get to that next level, things needed to change like my diet and my schedule. I decided every single day I would train my butt off to win a state title.”

In his return visit to the NYS tournament as a junior in 2016, Mosca took his first three matches by technical fall, injury default and 10-0 major to punch his ticket to the finals against Royalton-Hartland’s Cameron Swick.  Swick prevailed, 4-1.

“I felt like it was my tournament if I wanted it,” he said. “[Swick] was really good from that crackdown position and that’s where the match was won. I rode him out the whole second period and should’ve turned him. I had my chances. There was some pressure on me, but there isn’t pressure this year. I’ve been there already.”

Another reason Mosca feels less pressure is that he’s made a decision on his wrestling future as he committed to the University of Maryland, where he expects to compete at either 165 or 174 pounds.

“Maryland took interest in me early, so I went down there and it felt like home,” he said. “The academic support I’m gonna get is great and they’re building a really top notch team in the Big 10. I’m looking forward to being a part of it. A couple of my buddies are there - Alex Vargas [Syosset] and Jakob Restrepo [Sachem East] and they’ve only said good things.”

Mosca expects a lot of good things in his senior season, in which he said he plans to compete at 170 pounds, after earning All-American honors at the NHSCA Nationals this past spring (seventh at 160).

“I’ve done a lot of training with Gregor Gillespie and at Ascend with Craig Vitagliano,” Mosca said. “I work a lot with [John Glenn's] Zach Ancewicz - he’s the best partner in the state for me right now. It’s definitely one of the main reasons my wrestling has taken off to a new level.”

Mosca hopes that new level will bring him a number of additional achievements.

“I have goals to be a state champ and win Eastern States,” he said. “One my major goals is to bring a state title home to my school. We don’t have a lot of state titles and none in wrestling. On the wall, I'm up there as a state second place finisher. I want to change that.”