Matt Caccamise of Wayne captured the 113 pound Division 2 state championship in 2016. In Albany, he began with a pin and followed with three decisions, including a 1-0 win over Austin O'Reilly of Mexico, to strike gold.

After an active offseason, Caccamise committed to join the Buffalo Bulls, where he projects at 125 pounds.

New York Wrestling News asked the state champ about his decision and more. 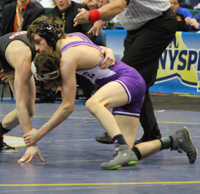 New York Wrestling News (NYWN): What were the main reasons you chose Buffalo?

Matt Caccamise (MC): I definitely wanted to pursue a D1 wrestling opportunity.  I chose Buffalo because Coach [John] Stuzman seemed very invested in me, and is really focused on producing champions.  I also liked the guys from the team and felt I would be a good fit.  Buffalo is also a top notch school where I know I will be able to obtain a well-respected college degree.

NYWN: What other schools were you considering?

MC: I had considered many different schools in NY and PA.

MC: Between the SuperSectional finals and the state tournament, I just continued practicing hard with Coach Mayville, and gaining confidence in every area of my wrestling.  I went into Albany believing there was no reason why I shouldn’t win.

NYWN: When the state championship match was over and you were a state champ, what went through your mind?

MC: I definitely loved the moment in Albany, however, once I left Albany, I did not think about it much.  It was another tournament, and after that I needed to prepare for the next upcoming one.

NYWN: What have you focused on this offseason?

MC: I have focused on improving every area of my wrestling, from neutral to bottom and top.

NYWN: What weight do you expect to compete at this year?

NYWN: What goals have you set for yourself in your senior year?

MC: I expect to pull together an undefeated season.

NYWN: What workout partners/coaches have been crucial to your success?

MC: Definitely coach Jason Bovenzi and Brad Mayville have been crucial to me developing and advancing me as a wrestler.  I am also grateful to coach Scott Freischlag who first got me into wrestling in 7th grade.