Redding, Barczak Among NY Champs at the Freak Show in Las Vegas 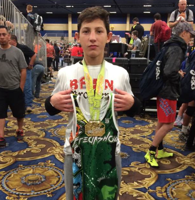 They showed no signs of slowing down with championships in Las Vegas over the weekend at the Freak Show.

Redding went 6-0 in the 15 and Under Division at 102 pounds, with a pin, technical fall and two majors along the way.  That included an 11-0 victory in the finals against Anthony Sissom of Nevada.

Barczak, who recently committed to Drexel University, rolled through the competition in Varsity 152 action, with falls in his first five matches (with all but one taking less than two minutes). The Section 9 standout then notched an 8-3 decision over Weston Milnes of Arizona in the first place contest on Saturday.

One day later, Barczak again took the mat, this time in the High School Elite competition at 152.  He added a silver medal to his weekend haul, with a 5-1 performance that included outscoring his foes 36-4 in his victories.

Both Chase Liardi of VHW and John Drapaniotis nabbed gold as well in Vegas.  Drapaniotis had a one-minute pin in the finals, while Liardi also recorded a quick fall in the title match. In fact, Liardi pinned three of his four opponents, with a 7-0 decision as well.

Ivan Garcia also made the podium in 15 and Under competition.

For the placewinners from New York (and overall), see below. 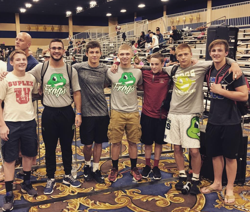