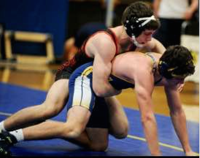 Noah Grover made up for lost time.

The Warsaw senior didn't begin wrestling until junior high school, but just a few years later, he had a breakout 11th grade campaign that ended with a third place showing at 152 pounds at the New York State tournament.

Grover showed he would be someone to watch in the postseason at the Eastern States Classic in January, knocking off third-seeded Jake Barry of Poly Prep in his opening bout. Grover then racked up three consecutive pins en route to the semis, where he dropped an overtime match to eventual large school state titlewinner Ryan Ferro of Warwick Valley. Grover was unseeded in the bracket at SUNY Sullivan, but he made the podium .... and a statement.

The Section 5 standout carried that momentum through the rest of a season in which he finished with more than 50 victories.  One that stood out to him was his decisive first period fall over Carson Daly, leading to a dual meet win over Brockport. [Warsaw has finished atop the NYS Division 2 dual meet rankings for three straight years].

Grover looks to complete high school with a state title before heading to his next destination, the University at Buffalo, where he expects to compete "anywhere from 157 to 174" pounds.  He also considered Binghamton and Brown.

"I chose Buffalo because I believe they will surround me with people that can make me successful," Grover said. "I also like the direction the program is moving."

So, a wrestling career that began just a few years back will continue for several more seasons - at the Division 1 level with the Bulls.

Noah Grover would like to thank the Paddock family, Coach Dee Gugel, Coach Rob Hirsch and Coach Jeff Royce for the guidance and coaching they’ve provided in his wrestling career.