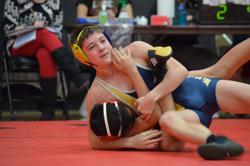 The pipeline top Michigan talent heading to Ithaca, NY to wrestle for coach Rob Koll and the Cornell Big Red continues this fall as senior Dominic Lajoie of Gaylord, MI has announced that he will be attending Cornell University to wrestle for the Big Red.

Lajoie is a 2x Division 2 State Champion and a 3x State Finalist.  He has excelled nationally throughout his career, most recently finishing 4th in both styles at the Junior Nationals in Fargo last summer.

Lajoie, who wrestled 113 over the summer, appears to be a potential lifetime 125lber in college and is currently ranked #10 in the nation at 113lbs by FloWrestling.

Lajoie is the #5 ranked wrestling in the state of Michigan's Top Senior Recruiting Rankings.  To view all of them, as well as other commitments, click here.

I'm proud to announce that I will be continuing my academic and wrestling career at Cornell University!!! Go Big Red!!! pic.twitter.com/IbFAIfvotK