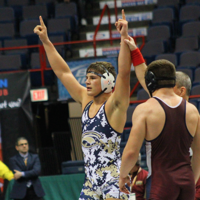 Falconer’s Jake Peru traveled to the Fred Bell Memorial tournament in Pennsylvania last season, looking for a meeting with the #1 ranked Division 2 182 pounder in New York at the time, Aaron Paddock of Warsaw.

“That’s the reason we went to that tournament,” Peru said. “My coach [Drew Wilcox] wanted me to wrestle him to see how I would match up.”

It turned out, Peru matched up quite well.

“I was nervous going in and he got the first takedown,” he said. “But after the first 20 seconds, I settled in and relaxed. I started taking my shots and everything started flowing.”

According to Peru, he led 9-4 before putting his opponent on his back and recording the fall.

That performance was typical for the Section 6 standout, who notched over 30 pins during his junior campaign, which he finished off with a 5-2 victory over Ian Chedzoy of Watkins Glen for a state championship in his first appearance at the Times Union Center.

“It was a huge stage, with screaming people everywhere,” he said. “But once I was on the mat, everything else just faded away. It was such a cool experience. After I won, I was just thankful for all the people who helped me get there and happy that all the years of hard work finally paid off.”

As a freshman, Peru competed at 126 pounds, taking second at the state qualifier behind Nick Hudson, a wrestler he also beat multiple times during that campaign.  He then experienced a growth spurt and jumped up several weight classes for his sophomore season.

“I probably grew 6 or 7 inches and I went up to 170 [pounds],” he said. “I missed about a month of the season with an injury and when I started, I wasn’t used to that size and strength. It was a totally different style of wrestling. But being a lightweight before was definitely an advantage; I was used to a lot quicker pace.”

He racked up victories during the campaign and took third at the Section 6 tournament to end his season.

“It was tough not making the state tournament, but it was just another learning year for what led up to my junior year,” Peru said.

He said he was motivated to make things different.

“I never stopped wrestling that offseason,” he said. “Throughout the entire summer, I never took a break. I worked out with a buddy of mine -  Nate Skonieczny. He’d beat up on me a little bit and teach me things. I also worked out with Kevin Strong from Frewsburg and other tough guys. I worked to get myself better every day and it paid off.”

In addition to his state title, it paid off with attention from college coaches.  Peru was in conversations with Lock Haven and Virginia before taking his official visit to Binghamton this past weekend.

“I liked the college a lot and I got along with the other wrestlers really well,” he said. “The coaches reminded me a lot of my high school coaches, so we hit it off too.  Everything about it made me feel at home.  It just felt right.”

Peru, who said he thinks he’ll be a 197 pounder at the next level, will have a stellar workout partner in the same class, two-time NYS champ Louie DePrez of Hilton, who committed to the Bearcats a few months ago.

“I’ve always looked at the rankings to see who’s where. To see my name – it’s kind of unreal,” he said. “It still hasn’t set in.”

Currently ranked #12 at 182 pounds in the country, if Peru continues to wrestle the way he did last year, he’ll see his name rise even higher on that list before he leaves for Binghamton.

Jake Peru wanted to thank his dad and coach Drew Wilcox, who have traveled all over with him to wrestle over the years.