In a back and forth match, Iran's Amirhossein Azim Maghsoudi topped Vito Arujau 12-8 at 58 kg for the Cadet World Championship.

Arujau jumped on the board first with a push out and added a takedown to make it 3-0, but Maghsoudi bounced back to hold a 4-3 lead after the opening period.

In the second, the Syosset wrestler hit two crotch lifts to go ahead 7-4, but the Iranian went back in front with a four-point move and finished on top.

Arujau will return to New York as a Cadet World silver medalist!

Vito Arujau will be going for gold.  The Syosset and VHW standout swept through his first three matches in Tbilisi to earn a spot in the 58 kg championship match against Amirhossein Azim Maghsoudi of Iran.

The Cornell-bound wrestler began with a 10-0 tech over Hector Candelaria Rivera of Puerto Rico before topping Japan's Ryuto Sakaki 9-6. Arujau followed with another technical fall, this time over Denys Borohan of the Ukraine.

The finals are slated for 10 am Eastern time.

Also in the title bout for the USA is Kurt McHenry, while David Carr and Jacob Warner will be competing for bronze. 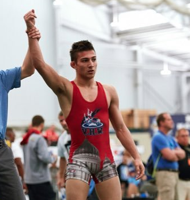 Men's freestyle competition begins on Saturday in Tbilisi, Georgia at the Cadet World Championships.  Among the five Team USA wrestlers set to take the mat on Day 5 of the event is Syosset's Vito Arujau, a three-time New York State champion.

Arujau will begin in the 58 kg bracket against Hector Candelaria Rivera of Puerto Rico, a multiple-time Pan Am Cadet silver medalist.  A win in that bout would bring on either R. Sakaki of Japan or R. Zarbaliev of Israel in the quarterfinals.

Joining those wrestlers in the top part of the bracket are competitors from Ukraine, South Africa, Azerbaijan and Jordan.

A year ago, Hilton's Yianni Diakomihalis captured the title at 58 kg at the Cadet Worlds.  We'll see if Arujau can make it two New York wrestlers in a row to stand on top of the podium at that weight.