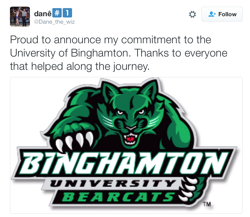 When we did a senior profile on Dane Heberlein during the summer, he said he was considering Binghamton, Appalachian State, Buffalo and Army West Point for his college destinations.

On Thursday night, he made his choice.  The two-time state champ and three-time finalist will attend Binghamton.

Heberlein isn't the only New York standout joining the Bearcats.  Louie DePrez of Hilton and Jake Peru of Falconer previously made pledges to the EIWA school, as did New Jersey's Aidan Monteverdi.

For more on Heberlein, see below.

The path to the podium at the Super 32 Challenge is always difficult, with top ranked wrestlers from around the country and brackets of 100+ competitors.  In 2014, Dane Heberlein's road to bronze at 106 pounds, in which he went 7-1 with four wins over wrestlers currently in the national rankings, included a unique challenge.

"In my third match, I downblocked a shot, and the kid's head went right into my eye," he said. "I couldn't really see out of my right eye the rest of the time. It was actually a really good experience, having something like that happen and realizing that you just keep going; nothing can hold you back."

It was the performance that Heberlein identified as perhaps the most memorable of a career that has had many highlights, including a second place showing at the NHSCA Nationals and three appearances in the New York state finals, with a pair of championships. 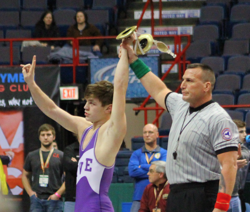 The first of those crowns came as a freshman, as Heberlein dominated throughout the season with an undefeated record. That didn't change at the Times Union Center, as he outscored his foes by a combined 30-0 at the state tournament on the way to the 99 pound title.

He returned to the NYS championship bout as a 10th grader at 113 pounds, setting up his third meeting of the campaign against Mexico's Theo Powers. The two had split their first two matches, but Powers took the third by fall, sending Heberlein to silver.

"After that, I knew there were some things I had to work at and I knew I had to get stronger so it wouldn't happen again," Heberlein said. "I couldn't take anything for granted. I had to go hard every time I was in the room, every time I lifted, every time I practiced."

Heberlein returned as an 11th grader at 120 pounds in a loaded Division 2 weight class that included Powers, 2015 state champ Jon Gomez of Locust Valley and several other returning placers.

"I was excited to have all those guys in my weight," Heberlein said. "You hear a lot about guys dodging people, but I was ready to get the best competition possible. It was a blast wrestling those tough guys."

Those tough guys included Powers. The two faced off at the Eastern States Classic, with Heberlein getting the overtime victory in the third place contest.

"Theo's a really nice kid, but being a competitor, I really wanted that match in the state finals one more time," Heberlein said.

He got his wish and his revenge, earning a 5-3 decision and his second NYS gold medal.

"Both state titles felt good, but the second one was a little bit better," Heberlein said. "My freshman year, I worked hard, but not as hard as I could've. I got away with just talent sometimes. My sophomore year I was going through the motions a little bit. But my junior year, I put it all together. I trained really hard and after I won that, I felt like I really accomplished something." 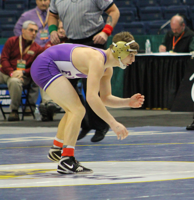 So, what's next for the Section 5 standout? He's been practicing all summer and is exploring his options at the next level, where he thinks he'll be a 133 or 141 pounder.

"I think I'll make my decision by the winter," he said. "I'm taking the SAT and ACT one more time and I'll work from there. It will be cool to take some visits and you never know."

One thing we do know is that Heberlein will be in the mix for a third state championship. He said he expects to take the mat at 138 pounds for the first part of the season before moving to 134 after Christmas.

"I want to turn the better kids on top this year," he said. "Obviously, I want another state championship and also to do well in national tournaments."

Who would doubt him, especially since he was able to see the path to victory, even with an eye swollen shut.

Dane Heberlein wanted to acknowledge a number of people, including his parents, the Paddock family and coaches Dee Gugel, Tom Aldinger, Bob Broad and Dan Bishop.  In addition, he thanked all his training partners at Alexander, including Nick Young and Nick Gaiser, as well as Anthony Argentieri and Kellen Devlin.