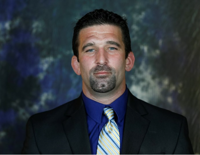 "Bringing Mike back home to Hofstra was extremely important to me," Papadatos said.  "I cannot imagine anyone being a better fit for the position here.  He is the total package and our coaching and wrestling philosophies go hand in hand.  He will have such a positive effect on all aspects of the program, and the community should be thrilled that they can cheer for Mike Patrovich again in his new role of now helping me lead our fine group of young men accomplish their goals.  To say I am excited about it would be an extreme understatement.  I jumped on the opportunity when it presented itself.  I have the highest regard for him and am so pleased to have his help on my staff."

Patrovich, who enjoyed a stellar scholastic career at Islip High School as well as an outstanding collegiate career at Hofstra from 2002 through 2007, returns to the Pride after holding several successful scholastic coaching positions since 2008. Patrovich has served as the assistant varsity wrestling coach at Eastport South Manor School from November 2013 through March 2016. In the past three seasons, Eastport South Manor placed seventh in Suffolk County with two county champions and one state champion in 2014, 12th in Suffolk with a county and a state champion in 2015, and fourth in Suffolk with two county and one state champion.

A four-time NCAA qualifier at three different weight classes. Patrovich earned All-American honors by placing fourth at 174 pounds in 2006 and sixth at 165 pounds in 2007. During his Hofstra career, he posted a 106-30 record, captured three Colonial Athletic Association individual championships from 2005 through 2007 and earned the CAA Wrestler of the Year award in 2006 and the CAA Championship Most Outstanding Wrestler award in 2007. In 2009, Patrovich was voted to the CAA Silver Anniversary Team.

Patrovich was a two-sport standout at Islip High School excelling in wrestling and football. On the mat, he was a four-time All-Suffolk County honoree, a three-time county champion and All-New York State award winner, two-time New York State finalist, 2001 state champion and high school national champion. He also received the 2001 Dellecave Award, presented to the best student-athlete in Suffolk County. On the gridiron, he received all-league and all-county honors and was a finalist for the Hansen Award as the best player in the county.

Patrovich is also the owner and head coach of the Barn Brothers/631 Elite Wrestling Club for youth of all ages since 2007. He holds a bachelor's degree in physical education from Hofstra. Patrovich and his wife Jeneane, have three children Trevor (7), Gia (4), Ella (2). The Patrovich family resides in Manorville, NY.