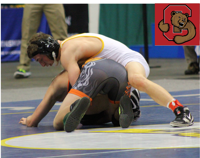 When he returned from the shortest of the trips, he knew where he wanted to spend his college years.

"I always wanted to go to an Ivy League school. I took a lot of visits and had a lot of sit downs with coaches," Richard said, mentioning Princeton, Brown as well as West Point. "When I was at Cornell, I loved the campus, the facilities and everything coach [Rob] Koll had to say. It's just two hours away from home.  When I got back, I talked with my family and called Coach Koll. I didn't need to see anything else. I felt Cornell was the perfect place for me."

A three-time NHSCA Academic All-American who is ranked third in his class at Holland Patent with a 4.0 GPA, Richard said he is looking to study business.

"I wanted to go to a college where I would come out with a great degree and great connections," he said. "Cornell has that and one of the top wrestling programs in the country. It seemed like a win-win scenario."

Winning is something Richard has done a lot of during his high school career, with a record of 218-26. He has earned All-America status at Fargo, NHSCA Nationals and FloNationals and took third in New York as a freshman at 126 pounds before capturing back-to-back NYS championships at 138 and 145 in his 10th and 11th grade campaigns.

Richard's run to gold in 2016 was convincing as he didn't give up a single point in Albany.

"As hard as it was to win a state title the first time, it was harder to repeat," he said. "I had a bad tournament last year at Eastern States [in January], but I sat down and figured out what I needed to do better. I took the rest of the season one period at a time, not thinking too far ahead.  Repeating was one of the best feelings in the world and I have another year to do it again."

Before he does that, Richard, who is currently ranked 10th in the country by FloWrestling at 152 pounds, is preparing to compete in Freestyle at Fargo.

And afterwards, he'll turn his attention to his final football season.  Richard was an honorable mention All-State linebacker a year ago and said his work on the gridiron "gets me focused for wrestling when it comes around."

When wrestling season arrives, Richard knows the target will be on his back again, this time at 152 pounds.

"I repeated, I showed I could do it," he said. "I showed the first time it wasn't a fluke. Now, in my mind, the third one is for fun.  I want to go out there and enjoy my senior season; work hard, win another state title and transition to college well."

Helping with that transition will be Richard's head coach at Holland Patent - his father, John Richard. The Golden Knights boasted three state placers a year ago, including a pair of New York champions for the second straight year - Alex Herringshaw and Richard.

"The wrestling room is always great," Richard said. "There are always good partners around.  I've always had Alex [Herringshaw, who graduated and committed to Army West Point] to train with. Champions definitely come in pairs. That was definitely the case for us."

Richard knows he will have plenty of champions to work with in Ithaca, where he expects to wrestle at 157 pounds. The Big Red has secured commitments from six wrestlers listed in FloWrestling's Class of 2017 Top 100 - Yianni Diakomihalis, Vito Arujau, Jake Brindley, Jonathan Gomez, Andrew Berreyesa and Richard.

"That was one of the biggest things," Richard said. "I saw the recruiting class coming in, with guys who have bigger accomplishments than me and knew I would be in a room full of great wrestlers. A lot of them are from New York and I know most of them. I'm just really excited."

A few thank you notes from Hunter Richard: "My dad has been there for me from pee wee days through everything. He always knew I could do it and even when I doubted myself, he never did. My mom is always there behind the scenes, taking care of me, helping me eat healthy, doing so much.  I also want to thank my coaches Brandon Lake and Jordan Swalgin and everybody in the community who always supported me and had my back. We have the best fans here at Holland Patent."