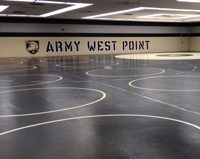 Kevin Ward begins his third year at the helm of the Army West Point wrestling program by bringing in 17 wrestlers for the 2016-17 school year.

The group has combined for 35 state medals, 19 state championships and four All-Americans in 12 different states. Eight of the 17 recruits spend last season at the United States Military Academy Prep School.

"This recruiting class has a chance to be very special and make a huge impact on our program," said Ward. "If you look at the size of the class, their accomplishments prior to West Point, and the fact that they are dedicated to achieving extremely high goals both on and off the mat, this is an impressive group of young men.  Each individual has the ability to compete at a very high level and are young men of great character.  We are very excited to get to work with them."

Trey Chalifoux comes to West Point from Father Ryan High School and will compete at 125 pounds. Under head coach Patrick Simpson, Chalifoux was a three-time Tennessee state champion as well as being named a NHSCA All-American.

Noah Hanau spent the 2015-16 school year at USMAPS and medaled twice at the Michigan state tournament at Lakeshore High School. He will wrestle at 141 pounds.

Luke Hodsden adds two state championships to the group while he attended Dripping Springs High School in Texas. He will compete at 174 pounds for the Black Knights.

Alexander Hopkins will compete at 174 pounds for Army after graduating from the Westminster Christian Academy in St. Charles, Mo. Hopkins was a state champion and an All-American.

Jeremiah Imonode comes to West Point from Phoenix, Ariz., after spending last year at USMAPS. The 197 pounder is the brother of senior Samson Imonode and was an Arizona state champion while at Desert Vista High School.

Cael McCormick, a native of Yorktown, Ind., comes to Army as a three-time medalist at the state tournament and will compete at compete at 149 and 157 pounds.

Isaac McMillan comes to the banks of the Hudson River from East Bend, N.C., where he advanced to the state finals three times at Forbush High School. The 157 pounder won the state championship once.

Nick Noel joins the Black Knights after graduating from the Pulaski Academy in Little Rock, Ark., where he was a four-time state champion. Noel comes in at 133 pounds.

Ryan Parker is the lone heavyweight of the incoming freshman class. The Chattanooga, Tenn., native was a four-time Tennessee State Champion at the Baylor School.

Noah Stewart joins the squad after graduating from Mifflin County High School in Lewisburg, Pa., and will wrestle at 165 and 174 pounds for the Black Knights. Stewart medaled twice at the Pennsylvania State Tournament and was named an All-American.

Lucas Weiland attended USMAPS last year and will wrestle at 149 pounds. The Imperial, Mo., native was named an All-American during his time at at Seckman High School.

Sam Williams comes to Army from Neosho High School in Missouri and attended USMAPS in 2015-16. The 165 pounder was a state champion while in high school.

Wyatt Wyckoff made the California State finals all four years at Paradise High School, winning once prior to attending USMAPS. Hailing from Paradise, Wyckoff will wrestle at 149 pounds.