CNY Spotlight on . . . Zac Caruso of Oswego HS as the Team Fights for Survival 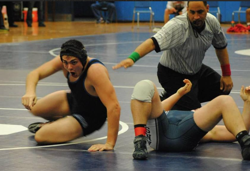 Jacob Smith (JS): First I've got to ask about the Oswego wrestling program. There was a rumor a little while ago that wrestling would no longer be a part of Oswego. Is that true?

Zac Caruso (ZC): There were some very hard budget cuts given to particularly our sports programs, completely cutting sports such as wrestling and football. Although it’s a setback we are attempting to fundraise and hopefully get our program back! Our varsity coach Mr. [Kurt] D'Angelo is great with things like this and he gives me hope for the future!

(See the end of this article for an update)

JS: It's good to hear there's still hope, as guys like you and Stephen Demong proved that some real talent comes out of Oswego. Are there any sort of fundraisers coming up or planned for the future?

ZC: We have a meeting coming up to discuss our next fundraisers. We just completed a pancake breakfast a little while ago and it seemed to be really successful.

JS: Hopefully the fundraisers will continue to be successful in the future. Speaking of the future, what are your plans for after you soon graduate from Oswego?

ZC: This past summer I enlisted in the United States Marine Corps and will be leaving for boot camp this July on the 18th.

JS: That's great to hear a Section III senior headed out to the U.S. Marine Corps after graduation. You'll be representing our country, and I'd also like to talk about how you represented Oswego at the Section III Tournament this year with a 4th place finish. What was that whole experience like for you this year?

ZC: The whole season was the best time I've ever had in my life, and honestly there were so many great people on our team and I knew they would always have my back. It was so nice to see my hard work finally give me results on the mat. I worked tremendously hard in the offseason after I snuck in to Sectionals last year and nearly upset the number one seed Kade Andrews. That gave me a little added motivation moving forward.

JS: That's right, you did nearly pull off a big upset in the first round that year! You also definitely had one of the biggest turnarounds out of anyone in Section III by basically tripling your win total from this season compared to last. Other than yourself, is there anyone else you credit with helping you improve so much over the last couple of years?

ZC: My cousin and role model Shane Bartrum, who is also an Oswego wrestling alum. He really pushed me to improve, especially when he was able to be an assistant coach last season. I have always looked up to him and strived to beat his win totals that he had before going off to wrestle in Ithaca. I also have to give the utmost respect to coach D'Angelo for having patience and fine tuning my skills every chance he got. Along with him there was also former wrestler Jordan Perchway (3rd in Section III in 2015) who helped me out all last season. The list could go on with all the thanks but these definitely are some of the main players in my recent success.

JS: It's awesome to hear the great atmosphere it seems Oswego has with those coaches and alumni. Considering you were in a very tough 220 pound weight class, I'm sure all that extra work and help really came in handy. Is there any opponent you specifically remember that was extra tough?

ZC: I have to hand it to Fulton's 220 pounder Noah Gates. That guy is so strong and seemed to be my achilles heel throughout the season. I met up with him in the Kenneth Haines tournament and lost to him by a point and that was our best match. We also met up in the semifinals of sectionals where I lost 6-2. As much as I hate losing, especially to the same person more than once, I have to give it to him for being a great wrestler this year.

JS: You guys certainly seemed to have some battles throughout the season. One thing I'd like to touch on are your tournament titles at the Phoenix Round Robin and Leo J Sammon Tournament. What were those moments like for you as your first tournament championships?

ZC: I can honestly say going into the season I did not think I would ever win a championship. I had a goal to get to a championship, but there was no way I expected to win two! Even with how great those were, my personal favorite of all my awards in the season had to be winning the MOW of our own Ackley Duals tournament. During that tournament I hit a groove and pinned everyone I faced that day. After that tournament I seemed to really find my place in the season.

JS: That was a very impressive day as you had big wins over guys from both Division I and Division II in Section III. Now, while you and a few other guys had great success during the season, it wasn't the greatest season for you guys in terms of dual meets. Is it tough to stay positive going into dual meets knowing you don't have a full team lineup, or did you guys handle it pretty well regardless?

ZC: It's always very hard to lose but we went it with a mindset of our dual meets being a place to improve. We wanted to keep the dual meets as close as possible and as trying as that could be we would always just go out and give every match our all. We really did have some great kids on our team this year!

JS: You guys did, and some of them aren't graduating this year. Hopefully they'll have a place to wrestle next year, and hopefully that's Oswego! Thank you Zac for doing this interview with me and for giving some insight into what's going on with the Oswego sports programs. We'll all keep positive thoughts and do our best to help fundraise to keep the program alive!

This interview was conducted prior to a new development with the Oswego athletics programs.

According to this article on June 21 on syracuse.com:

"New York State Sen. Patty Ritchie secured a special $150,000 grant to help rescue Oswego sports programs. ... Which sports could get the money and be reinstated is still to be determined. Oswego High School athletics director David Grydzka ... said there is a priority list for teams, though he declined to offer details ...  He said it clearly won't reinstate all sports, 'but will go a long way.'"