Jacob Smith shines the spotlight on wrestlers in Central New York for cnywrestling.com. Here's his recent discussion with Cortland's Isaiah Brookman, who will be staying in state next year. 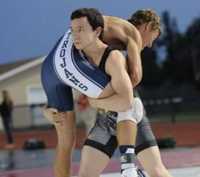 Jacob Smith (JS): You had a great senior year that ended with a 5th at Sectionals. Do you have any plans for wrestling now that your high school career is done?

Isaiah Brookman (IB): Yes, I plan to go to TC3 [Tompkins Cortland Community College] and wrestle with Finger Lakes Prep these next two years. They have a great club and environment that I have loved being a part of.

JS: I've heard a lot of great things about that club. Are there any other Section III standouts that you'll be wrestling with?

IB: Not really any from Section 3. Jack Buell practices there with our club consistently but I believe he will be attending West Point. The group is more Section 4 oriented with guys like Jimmy Overhiser and Connor Lapresi. Many other standouts practice with us like Brandon Gould, Yianni Diakomihalis and Vitali Arujau.

JS: That's a pretty good group to be associated with. Who do you normally end up drilling with?

IB: When I am up there I like to drill with Brandon Gould and Grady Alpert. They are both monsters and have made me a better wrestler just from training with them.

JS: Now back at Cortland you guys had a pretty talented middleweight lineup. Who were you normally going at it with during practice there?

IB: I would normally practice with Aaron Kelchner and Kiegan Brown. Both guys are young, talented, and have a ton of potential. We each have  different styles and working with those helped all of our skill sets.

JS: You make a good point in that they both are young and quite talented. Other than them, are there any other Cortland wrestlers you think people should keep an eye out for in the coming years?

IB: Our 195 [pounder] Dakotah Miller will be a definite force in contention for a section title next year. He trains at FLWC occasionally as well. Keep an eye on our lightweight Kaiden Haines coming up to varsity next year. He has been putting in the time this offseason and we will see how it pays off for him!

JS: Speaking of lightweights, you guys were definitely missing quite a few spots in that part of your lineup this year. Coming off three really successful years for Cortland, how hard was it to kind of go through a "rebuilding" season?

IB: It was not as hard as you might imagine; in fact I believe it made us stronger.  We are only losing three seniors, myself, Russell Gerhard, and Schuyler Miller. The team had to come together and battle every dual to keep up. We still managed a 9-9 record giving up 30 points a dual. In the long run, though, dual wins don't mean anything. The real work is done at classes, sectionals, and states. The hardship of this year will stick with these guys and with a bigger lineup, they will start winning these close duals again.

JS: You make a good point with the close duals, as you guys lost six duals by six points or less! On the upside, though, you guys sent 5 guys to Sectionals. How would you describe your first trip to the Sectional tournament as a wrestler?

IB: It was a great experience that I'll never forget. Having been denied two years the trip being behind Zack Alexander in ninth grade, sustaining a season ending injury in tenth, and then failing to qualify as a junior losing a heartbreaker to Ben Hood in the blood round of classes, it was amazing to finally make it. Even though I didn't achieve my goals for certain reasons, it was a memory I will never forget.

JS: One thing for sure is that you were definitely in a tough weight class with guys like Tanner Cook, Brad Dietz, Noah Handy, Conner Steria, and more. I know you split your matches with Steria this season and came up short a few times against Dietz. If you had to, who would you pick as your toughest opponent from the season?

IB: I was beaten by a few other out of section guys. But I have to say Brad Dietz. The guy is an athletic animal and throughout our history I have gone 0-5 against him! He's majored me twice and beat me by one or two points three times in our history. Even never beating him, I have to say those matches were the most fun because of how intense they were! One small mistake always cost me against him and they were down to the wire. I'll never forget that personal rivalry.

JS: I remember you gave him quite a challenge at Sectionals in a 1-0 battle! I think that performance and your season overall surprised a few people, but who would you credit the most with helping you get to where you did last season?

IB: I have to say that my father Jay Coniglio is due the most credit. From taking me to countless offseason tournaments, to being a good coach when I needed one, and overall always keeping me on track for my goals, I owe him the most for the success I have seen. He's helped me come a long way from the midget Cortland seventh grader who went 0-4 on modified!!

JS: That's awesome to hear. Speaking of modified wrestling, what do you think are some things that could be done to help make that part of wrestling more popular?

IB: Personally, I totally support the singlet, but I believe it is the second biggest problem in kids not coming out for wrestling. The first being obviously the toughness of the sport. Countless kids across the country (and I've seen a lot of it even at Cortland) are either embarrassed or uncomfortable wearing the singlet that we know as customary. I liked the idea from the Who's Number One tournament of letting them wrestle in compression shorts and shirts. I think an option like this for kids would help increase our falling numbers greatly.

JS: I've got to say, I'd probably agree it's a necessary decision for the sake of the sport. Moving on to another popular subject, though, how do you feel about the 2-day Section III Tournament idea as a wrestler?

IB: Although I thought they ran it well for the Section 3 tournament this year, I think a two day tournament may be helpful for performance. I don't know a whole lot about the subject so I would have to  look into it more. But I think longer times between matches could definitely show different results for many wrestlers.

JS: To cap things off, I'd like to ask you about a couple of coaches you got to interact with at Cortland. Coach Gary Dillingham and Coach Dave Darrow are both pretty legendary figures in Central New York wrestling, so what would you say it was like to have them as your coaches for a couple of years?

IB: Both coaches were amazing and coached differently. Mr. Dillingham was relentless and knew so much about the sport. He was an old school guy who didn't take any crap from his wrestlers. Some people didn't like that, but I did and ultimately it's part of what made Dill so great. He expected your full effort and he knew if it was there or not. Darrow is a great person and gave us the practices alongside Joe Nicholas that we needed to outwork our competition. We knew we worked harder than most and we were proud of it.

It was an honor to have so many great coaches with me all the time. Modified coach Bill Gallow as well was always there for me and he taught me even after I was on the varsity. I am extremely grateful to all of these men.

JS: Thank you for the interview Isaiah and I'm sure those kind words would mean something to all of those coaches. Good luck with your wrestling in college and maybe we can have another one of these during next season!

IB: Thank you. I look forward to it!