Alexis Porter represented Team USA at the World championships in the past and the Shenendehowa graduate and current wrestler at McKendree University will compete for the Red, White and Blue again.

Porter captured the 67 kg title at the Body Bar Women’s Nationals on Sunday to earn her spot on the Junior World Team headed to France.  She blitzed her way through the bracket, with three technical falls and a decision to earn a spot in the finals. (In those matches, she outscored her opponents 43-5).

In the first bout of the best of three finals series, Porter and King’s Jessica Kee were knotted at 4 in the second period. However, Porter took over from there, moving ahead 6-4 with under a minute and a half to go. The New York native then picked up four more on a big move that forced her opponent out of bounds before going upper body with short time remaining for four additional points and a 14-4 technical fall.

In match two, Kee led 2-0 after the first stanza, but it was all Porter afterwards, as she tied it up with about two minutes remaining with a go behind and tacked on another takedown about 30 seconds later for a 4-2 advantage. A pushout made it 5-2 and that was the final score. [2015 Fargo champion Skylar Grote of Blair Academy nabbed third in this bracket].

New York had another female wrestler come out on top in Texas. Zoe Gress of Curby 3-Style Wrestling won the Schoolgirl 105 pound weight, starting with a pair of shutout technical falls before an 8-4 decision in the finals against Miranda Dibenedetto of Double Dragon Wrestling Club. 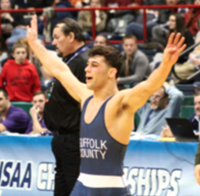 On the men's side at the UWW Junior World Team Trials in Freestyle, former Ward Melville star Nick Piccininni went 4-1 to take true third at 55 kg. The Oklahoma State freshman notched a pin and two technical falls (including one over Gavin Teasdale, which avenged a loss from a few weeks ago). He then defeated Austin Assad, 11-7.

Buffalo's Jake Gunning won his first two bouts before a 5-4 loss to Jordan Wood, who went on to earn the spot on the World Team. Gunning forfeited the true third contest.