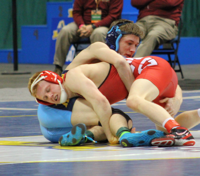 University at Buffalo wrestling head coach John Stutzman has assembled one of his finest recruiting classes since arriving on campus in 2013. The 14-member class is comprised of wrestlers that have made 39 state appearances, have won 29 state medals, two National Prep All-Americans and six state champions.

"This is another great class for our program," Stutzman said. "Every year we add student-athletes who have high expectations for themselves academically, socially and athletically and this year's class is no different. With the addition of this class and the student-athletes in our program, we feel this will continue to elevate our program in the Mid-American Conference as well as nationally.

"I need to give a lot of credit to Coach Fechko who has worked tirelessly in putting this class together."

Patrick Borelli was a three-year letterwinner and two-year team captain at Chenango Forks High School in Binghamton, NY. He went 26-10 his senior season.

Brandon Gould was a three-year team captain at Watkin Glen High School. He went 47-1 and finished third at the New York State Championships at 125 lbs. his senior season. Gould's 205 career wins were a school record.

Derek Spann, from Adirondack High School in Boonville, NY, went 54-2 his senior season at 126 lbs. He set the school record for most pins in a season (41) and a career (144) at Adirondack. The two-time team captain was the New York state champion in 2013.

Ryan O'Rourke is also from Boonville, NY and wrestled at Adirondack High School. He went 52-1 as a senior and is the Wildcats' all-time wins leader. O'Rourke was a three-time Center State Conference champion, a two-time Section 3 champion and was the state runner-up at 132 lbs. in 2016. He was also a two-time All-State selection in cross country.

Matt Seitz wrestled at Monsignor Farrell High School in Staten Island, NY where he finished third at the 2016 New York State Championships and was a two-time state qualifier. He was also a two-time National High School Coaches Association All-American after twice finishing third at the Junior Nationals.

Bradley Bihler wrestled at Maple Grove High School in Bemus Point, NY. He was a four-time state place winner and was the 2016 New York State Champion at 138 pounds. He also took third place and six place, twice, over his career at states. Bihler finished his high school career with a record of 193-33.

Josh Bressette was a two-time New York State Section 2 champion at Fort Ann High School in Fort Ann, NY. He was a place finisher at the 2016 Eastern States. He went 38-5 his senior season and had over 100 victories over his career. Bressette was named a 2016 Albany Times Union first-team All-Star.

Ryan Peters hails from Maine where he wrestled at Timberlane Regional High School. A two-time state champion, Peters went 24-1 as a senior. He was the 2015 New England champion at 145 lbs. and was an All-American as a freshman, sophomore and junior.

Eric Fasnacht hails from Strongsville, OH where he wrestled at Padua Franciscan. A four-year letterwinner, Fasnacht had 22 pins and 112 takedowns his senior season and ranked fourth in school history with 161 career victories. He was the North Coast League Champion in 2015 and 2016. He finished second in the state as a senior and seventh as a junior.

Matt O'Brien is from Ward Melville High School in Stony Brook, NY where he was a three-year letterwinner. As a senior, O'Brien went 37-5 and was a league and county champion and was a state qualifier. He was named team MVP as a senior and earned the team's Iron Man Award.

Logan Moriarity hails from Jefferson City, MO where he wrestled at Jefferson City High School. Moriarity was the state champion at 170 lbs. his senior season after posting a 43-1 record. He set the school record for wins with a career mark of 183-17. He finished fourth in the state as a freshman and third as a sophomore and junior.

Cameron Caldarelli wrestled at Brockport High School. A three-time Section V champion, he finished fourth in the state in 2015. Caldarelli was the team MVP and earned the Section V Sportsmanship Award. He was also an All-State football player at Brockport.

Logan Rill wrestled at Mount Saint Joseph in Hampstead, MD. Brother of current Bull, Tyler Rill, he went 30-6 his senior season, was the MIAA Champion and finished second at the state championships. Rill also finished fifth at National Preps and sixth at Beast of the East. He was named to the All-Metro and All-Academic teams.