All in the Family: 2x State Champion Louie DePrez of Hilton Commits to Binghamton

Will Join Brothers Vincent and Anthony With the Bearcats 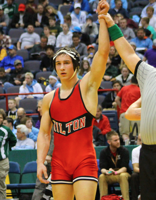 In 2014, three DePrez brothers finished in the top 3 at the New York State tournament. Seniors Vincent and Anthony took first and second, respectively, while freshman Louie earned bronze at 138 pounds.

The trio could all be in the same lineup again a few years down the road, as Louie DePrez gave a verbal commitment to Binghamton on Sunday, where he will join Vincent and Anthony, the starters at 157 and 165 pounds, respectively, for the Bearcats in 2015-16.

“My brothers are there and family means a lot to me,” Louie DePrez said of his decision, adding that he also strongly considered Cornell. “It would be pretty cool to all wrestle together again. I really like the coaches and I know all the guys there. It’s also a really good education.”

DePrez has been an impact wrestler for Hilton for years. As an eighth grader, he qualified for the state tournament at 120 pounds, winning a match. A year later, he made his first podium appearance, as mentioned earlier, after compiling four wins at 138 in Albany.

And not long after that performance, DePrez faced the champion of that bracket, current Buffalo starter Brandon Lapi, at the FloNationals and defeated him.

“Taking third as a freshman showed me that I was there with the top caliber kids,” he said. “When I beat [Lapi], it showed me I was closer than I thought to actually winning a state title. I thought I could come back next year and win it.”

That’s exactly what he did.

As a sophomore, DePrez made another leap in weight, going up to 160 pounds. At the Eastern States Classic, he took a few lumps, falling in close bouts to John Glenn’s Brandon Aviles and North Rockland’s Blaise Benderoth (as well as an out of state opponent) in a sixth place showing.

However, those were the last losses he experienced in high school action for the Cadets.

“At Eastern States, I was figuring kids out a little bit,” he said. “At the state tournament, I prepared more and better and knew what they were were going to do going into the match. I used that to my advantage and tweaked my technique a little bit.”

What he did worked, as he topped Aviles in the semifinals, 4-1, before besting Benderoth in the championship contest at the Times Union Center, 7-3.

And then it was time to do it all over again. In his 11th grade campaign, DePrez dominated the whole way at 170 pounds, going 48-0 with all but two of his wins by bonus points on the way to NYS gold medal #2.

“I felt a big difference from my sophomore to junior year,” he said. “I felt stronger and skill wise, I had more in my arsenal. I was really happy to win again - all my hard work paid off. I know I need to keep focusing on my technique and getting better. There’s always new competition gunning for you. Last year was one step closer to getting the third championship.”

He’ll also look to be part of another team title as a senior with a loaded Hilton squad that includes four-time NYS champ Yianni Diakomihalis, 2016 99-pound winner Greg Diakomihalis as well as experienced postseason wrestlers like Austin Hertel and Mike Spallina.

“It’s been fun to wrestle for Hilton,” he said. “We all work together and have fun but at the same time, we work hard and get done what needs to be done practice wise and training wise. We make each other better and I think that’s why we have such a good team. We drive each other forward.”

The same has been true of the DePrez brothers, including ninth grader, Sam, for years.

“We all wrestle sometimes,” DePrez said. “You can definitely say it gets very competitive. Vincent and Anthony - they beat me up. But I’m working on it.”

He’ll have plenty more chances to battle his brothers when he joins them in the Bearcat room in the fall of 2017.