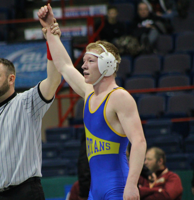 To reach the top of the podium in Albany, Kobe Garrehy had to leave another potential state title behind.

Garrehy had competed for years on the gridiron, including as a cornerback for the state championship Maine-Endwell football program that won 62 straight games and was the subject of an ESPN "30 for 30" documentary.

But after he left the wrestling state tournament after a 1-2 performance during his junior year at 138 pounds, he believed it was time to put all his energy into one sport.

"I played football my whole life, but for my senior year, I didn’t play so I could lift for wrestling," Garrehy said. "I knew I had to get a lot stronger. Our football team is very competitive, so I would miss the first couple of weeks of wrestling practice and wouldn't get practices in before certifications. I like wrestling a lot more and I knew that I wanted to wrestle in college, so I decided to focus on just wrestling."

That included a lot of offseason time in the weight room as well as on the mat.

"I did a lot of freestyle during the summer," he said, adding that he worked with Brandon Toro. "It helped me a lot on my tilts and on my feet. I got a lot bigger with my lifting and decided to go up to 152 pounds. Not cutting as much weight helped me a lot. I was able to train harder and not really focus on weight, just on technique."

His work seemed to make an impact right away, as he picked up a 10-1 major in the first tournament of the season against returning state qualifier Madison Hoover of BGAH (in addition to three falls).

"I wrestled a lot more confident from the beginning of the season," he said. "I opened up when I was wrestling. I wasn’t scared to do stuff, I just had fun."

That led to plenty of dominance. He entered the Eastern States Classic unbeaten and although he was the #8 seed, he believed he'd finish high on the podium.

"I felt pretty confident going in," he said. "I knew I was a lot better than eighth. I was determined to prove people wrong."

After a pair of major decisions in his opening matches, Garrehy met 2014 state champ and nationally-ranked Chris Mauriello of Hauppauge in the quarters.

According to Garrehy, Mauriello got on the board first, but the Section 4 wrestler turned things around quickly, ending the match 1:17 into the first period.

"I knew he was tough and he took me down early," Garrehy said. "But I got the escape and we got into a scramble and I pancaked him and got the pin. After I beat him, I knew I was the top person in the state."

It didn't end there. Garrehy kept rolling. According to trackwrestling, he went 41-0 with 37 of those wins by bonus points (28 pins) heading into the state tournament.

"My coaches and workout partners, like Levi Struble and Micah Miller, pushed me all year," he said.

Going into the NYS championships, Garrehy was the number two seed at 152 pounds in Division 2 behind Dakota Gardner of Fredonia (now a five-time NYS placer).

Garrehy won his first two bouts by major before a six-point victory over third-seeded Zach Bierfeldt. Then, it was time to step into the spotlight in the title bout against Gardner.

"I never wrestled him before and didn't see him wrestle that much," Garrehy said. "I just had to go out and wrestle my style, not his. Once I got the jitters out from the big stage, I felt pretty good. He got an early takedown, but I reversed it within a second or two and turned him."

That set the tone for an 8-3 victory and a state gold medal.

"It didn’t really hit me after the match ended," Garrehy said. "Later that night, it hit me that I finally reached the goal I was striving for my whole high school career."

He reached another objective weeks later when he committed to wrestle in college at the University at Buffalo, where he expects to begin at 157 pounds.

"My brother goes there so that was a big reason," Garrehy said about choosing the Bulls. "I really liked the facilities - there was a nice weight room and I really liked the campus a lot. I wanted a big campus, where there would be the chance to meet a lot of new people."

But before going to Buffalo in July, Garrehy plans to wrestle at the NHSCA Nationals this weekend.

"I haven't wrestled at Virginia Beach before, but I want to see how good I am on the national level, to test myself against wrestlers from other states," he said.

He'll get that chance. However, he already knows that in New York State, he’s made it to the top - more than once.

"I've been on the big stage in football and in wrestling," he said. "It's pretty cool winning state championships in both sports."