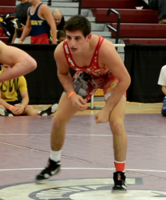 As a seventh grader, Long Island Lutheran’s Michael Berkowitz went to the top of the podium at the New York State Prep championships. He’s made that an annual tradition, winning five titles at that event already with his senior season to go.

“There are two more guys who have won it five times,” Berkowitz said. “I’m planning on winning it again and breaking the record this year.”

He’s never had to look far for inspiration along the way.

“My mom had four surgeries and three courses of chemotherapy during my high school career,” he said. “It was really hard, but I used that as my motivation. Before I get on the mat, I always think about how it’s for my mom. She's good right now.”

“Michael’s story is about overcoming adversity,” added Long Island Lutheran head coach Jim Farrell. “Throughout Michael’s high school career, he has had to deal with his mother being very sick. She has been fighting cancer for three years. He would use his mother as his inspiration and always wanted to do well for her.”

He certainly has done well. In both 2014 and 2015, Berkowitz earned a spot on the medal stand at the Prep Nationals, including a seventh place showing at 132 pounds a year ago after taking sixth as a sophomore.

In his final match of the Prep Nationals as a junior, he pinned Colton Williams, a double Fargo medalist.

“I think placing both times in the Prep Nationals - that’s my best achievement in wrestling so far,” Berkowitz said.

And he isn’t done. The 2015 NYS Freestyle and Greco Roman champion got things off to a solid start at the Journeymen Classic in October, beating a pair of New York State qualifiers, Brady Robin and Josh Bressette. He’s currently undefeated during the regular season for Long Island Lutheran, including pins in all eight of his December duals.

In addition to winning his sixth New York Prep title, he said his goals for the campaign include winning the Eastern States Classic and a National Preps crown.

And then, it will be time to move on to Division 1, as he recently committed to Franklin & Marshall, a college that produced an All-American (Rick Durso) in 2014.

“It’s a great school academically and that’s my number one concern,” Berkowitz said, adding he will likely compete at 141 or 149. “I went on an official visit there and everyone was so nice to me - I really loved it. I really liked the coaches."

There have been quite a few coaches that Berkowitz thanked for his success to this point.

Those experiences have helped Berkowitz win 165 matches and put him on the verge of New York State Prep history.