New York and New Jersey excelled at the Super 32 Challenge at the high school level, combining for a total of five championships (Yianni Diakomihalis and Adam Busiello for NY; Sebastian Rivera, Nick Suriano and Shane Griffith for NJ).

Local wrestlers also found quite a bit of success in the Elementary and Middle School brackets in Greensboro, North Carolina over the weekend. Here's a look at the grapplers who placed at the top notch tournament. 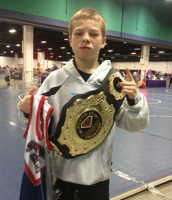 Stevo Poulin of Journeymen won the 70 pound crown in the middle school tournament with a perfect 5-0 mark. Along the way, he recorded two pins and a technical fall in a dominant performance.

Poulin was joined by another Journeymen competitor, Leo DeLuca, on the podium after DeLuca nabbed third at 60 pounds in the 8 & under tournament.

Both Jordan Titus of Barn Brothers and Lachlan McNeil of G2 earned fourth place finishes in middle school action, at 75 and 85 pounds, respectively.

New Jersey wrestlers returned home with plenty of hardware in the youth divisions on Sunday.

At the middle school level, Dylan Cedeno of Scorpions led the way with a championship showing at 90 pounds.  Cedeno opened with three straight pins before outscoring his next two opponents 13-0. That took him to the title match, where he captured a 3-2 decision to win it all. That victory was over fellow New Jersey wrestler Wil Guida of Coop Trained, who shut out his first three opponents, including a 15-0 technical fall, before a one-point semis triumph.

Cedeno wasn't the only placer from Scorpions, as Anthony Clark earned third at 95 pounds. Also collecting bronze was Bitetto Trained's Robert Howard at 100, while Joseph Cangro, another Bitetto Trained representative, was seventh at 80.

That wasn't all for New Jersey. In 11 & under competition, Justin Griffith of Tyrant Wrestling earned a belt by going unbeaten at 103 pounds. In addition, Elite's Matthew Henrich picked up silver at 70 pounds while Brock Zurawski of Junior Hermits was fifth at 80.