With the season quickly approaching, it's time to take a look at high school wrestling in New York. We start today, as Dylan Morrison takes a look at Section 10.

After a successful past few years at the state tournament with Nolan Terrance winning last season and Hunter Ayen and Dillon Stowell capturing championships in 2013, more Section 10 wrestlers are committing themselves to the offseason.

“After Dillon and I won our state titles, it gave Section 10 wrestlers confidence over anything,” Ayen said. “When we leave our section, we see tough competition, and yeah we may be competing in more competitive matches, but in the end that’s what makes our section better. The sooner our wrestlers can exceed the limits other sections in the state have tried setting for ours, the better off Section 10 will be in the future. It all starts today!”

Gouverneur's Joey Bush returns after placing fourth in Albany last season at 138 pounds and Ogdensburg's Tanner Lapiene is looking for a spot back on the podium after placing back in 2013 and suffering a season ending injury during the week before Sectionals.

“I think this year Tanner Lapiene and Joey Bush are in great positions to find themselves back on the podium for Section 10,” said Gouverneur coach Joel Baer.

Section 10 has the potential to bring home some hardware this year. Let’s take a look at Division 1 and Division 2. 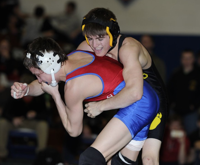 There will certainly be plenty of experience in Division 1 this year with nine returning Sectional champions back. Who will follow Terrance’s footsteps onto the podium this year?

The main guy to keep your eye on this season for Canton is Ryan Brown, who lost a tight match last year to the eventual New York State champ, John Arceri. Brown will look to wrestle his senior year at 113 pounds.

My dark horse for Division 1 is 285 pounder Chris Tompkins, who showed a lot of improvement at the end of the year against state finalist Dan Appley and champ Nolan Terrance.  Brown and Tompkins will look to lead their team to another Sectional title.

Massena has a solid group of wrestlers returning. The squad will be led by Hunter Perrine, who finished second at the Greco State tournament in the spring and made his way to Fargo in the summer. With Terrance winning the school’s first state title last year, the Red Raiders are as motivated as ever to follow his lead.

Malone has a large roster with the majority of the wrestlers being underclassmen. This year may be a building process, but you can bet that the Huskies will be ready to show that they compete with Canton and Massena. Look for Thomas Trombley to lead this up and coming team. 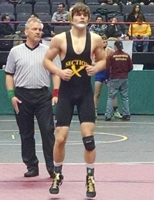 Gouverneur will be the favorite again this season led by Joey Bush, Derrick Stowell and Daniel Mullin. With a strong group of seventh and eighth graders moving up, this will be a tough squad with close to a full lineup.

“We should have a strong, competitive team because of the smaller weights that are being filled,” Bush said. “My goal is to get on top of the podium at states and become an All American in Virginia Beach”.

Stowell has been working hard to get his first Section 10 title this year.

“I’ve gone to a lot of tournaments and have been fine tuning my technique a lot with Joey [Bush] and my brother Dillon,” said Stowell. “My goals are to win more tournaments and get on the podium at the state tournament."

Ogdensburg also has an experienced group of young wrestlers returning; unfortunately for the Blue Devils they don’t have the numbers to fill their lineup.

They will be led by Brody Sheppard and Tanner Lapiene, who are both capable of being on the podium come February. Lapiene didn’t let his injury stop him from wrestling during the offseason. As soon as he was cleared, he was competing, placing third at the Freestyle State tournament and second in Greco before also wrestling at Fargo.

With a solid group of middleweights, it looks like it will be a very good year for Division 2 wrestlers in Albany this winter.