With high school practice beginning, it's time to take a look around the state. Today's focus is on Section 7.

Section 7 saw two wrestlers compete on Saturday night in the NYS finals in 2015, with Jordan Bushey dominating his way to a title and Jacob Nolan of Saranac taking second in an overtime bout. Nolan is back, along with multiple placers and qualifiers from last season. Let's see what Section 7 has to offer in 2015-16. 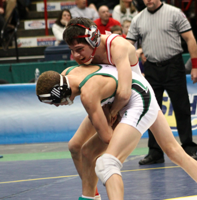 Saranac’s Jacob Nolan is a freshman, but he is already a two-time NYS placer and came within seconds of being a state champion in 2015 as an eighth grader at 106 pounds.

Last year in Albany, Nolan outscored his first three opponents 21-2 on the way to the finals, where he dropped an 8-6 overtime decision to nationally-ranked Jonathan Gomez of Locust Valley after Gomez tied the match as time expired in regulation. Nolan will surely be someone to watch once again in the lightweights on the statewide level.

“He was right there,” said Peru coach Mike Hogan. “He continued to wrestle well after the season. He went 14-1 at the Schoolboy Duals for New York. He’s such a tough kid. He hit a growth spurt and I imagine he’ll be moving up to 120 or 126 this year and I think he’ll have another terrific year.”

Nolan wasn’t the only lightweight to make the podium from Section 7. Peru’s Carson Dobozy nabbed sixth at 99 pounds following a season with more than 30 victories in which his only losses were to state placers.

Dobozy picked up a pin in his debut at the Times Union Center before losing a 3-2 match in the quarterfinals to eventual third placer Drew Schafer of Palmyra Macedon on a penalty point, according to Hogan.

“Carson wound up having a tough finish,” he said. “He was up the whole way [in the consolation semis] but wound up getting taken down at the buzzer to lose by one. Then, he was up 5-0 in the fifth place match, tried to roll through on a cradle and got pinned. He had a really nice year and placed in his first trip to the tournament. He’s gonna be tough again, probably at 113.”

Dobozy’s teammate Brandon Goddeau also advanced to Albany, where he met two-time state finalist Dane Heberlein of Alexander in the first round. He’ll be back, looking to get his hand raised in the postseason.

"He does really well academically and it's in his family to be tough, competitive wrestlers," Hogan said. "We'll see what weight he goes."

Speaking of meeting NYS finalists, Northern Adirondack’s Roland LaPoint made a solid debut at the Times Union Center, coming within one victory of earning All-State status at 120 pounds with a 2-2 mark. LaPoint picked up a major decision and a 10-6 win over 2014 state runner up Luke Yankloski of Wayne in the consolations before falling to former state champ Tony Recco of Lyndonville.  Look for him to come back strong.

“LaPoint is athletic, strong and just figures out how to beat you,” Hogan said. “He’s like a street fighter, a really scrappy kid.”

According to trackwrestling.com, through February 5, Johnny Devins of Saranac, a multi-time NYS qualifier, had just one loss (to Mexico state champ Theo Powers) while racking up more than 30 victories. He didn’t compete at the Section 7 tournament, but will look to make the trip back to the state championships in 2016.

“Devins is a terrific kid,” Hogan said. “I look for him to bounce back strong.”

There are several others who will be in the mix, including returning Section finalists Jordan Daniels and Brandon Yip of Saranac, Mark Rabideau and Anthony Cartee of Beekmantown and Jimmy LaPoint of Northern Adirondack.

The previously discussed Jacob Nolan wasn’t the only Saranac wrestler to make the podium at the Times Union Center, as Will Marcil nabbed sixth at 160 pounds with two pins during the tournament.

“I thought Will could place last year and he went to the states for the first time and did it,” Hogan said. “He has a nice fireman’s carry and gets a lot of back points. He’s been in the battles for a few years and he’ll be competitive again this year too.”

Northern Adirondack’s Austin Trombley got in the win column at 145 pounds in his second straight state tournament appearance and is someone to track as well.

“Austin takes losses during the year, but he gets it right at Sectionals and wins there," Hogan said. "He knows how to get it done. He hasn’t put it all together yet at the states but I hope this is the year.”

Like Trombley, Peru’s Colin Hogan has made multiple appearances at the NYS championships.

“Colin got pneumonia during the season last year and it really impacted him,” Hogan said. “He came on strong at the end. He trained all summer long with the Fargo team and has been wrestling well. I expect he’ll have a good year at 132 or 138 pounds.”

One other wrestler who competed in Albany in 2015 was Beekmantown’s Casey Provost, who looks for a return ticket. That’s also true of wrestlers like Saranac’s Rafael Rivera, Peru’s Ethan Feazelle and AuSable Valley’s Dylan Baker, who represented Section 7 at the biggest tournament of the season prior to 2015.

Others to keep tabs on include Section second placers Joe LeClair of AuSable Valley and Peru’s John Gallo and Nick Bushey.

“LeClair is tough," Hogan said. "I think Nick Bushey will be a tough guy to beat this year and John Gallo has so much talent. He’s a seasonal wrestler, but he's really athletic."

Beekmantown wrestlers Gage Cook and Clay Watts were Section 7 champions last year and are strong candidates to do it again. Watts beat 2014 Section 7 champ Kenny Rivers of AuSable Valley to earn his bid to the state tournament last season, while Cook recorded more than 15 pins.

Colby Staley of Saranac lost to Leon Riley, a wrestler he had beaten earlier in the year, in the Sectional championship bout last year. However, he competed at the state tournament in 2014 and is certainly among those who could make his way back there.

Like Staley, Riley Sartwell was a Section runner up a year ago, falling against state placer Paul Herrea of Saranac, who graduated. Look for him to make an impact at 220.

We’re also keeping an eye on Chance LaPier, who earned All-American honors at NHSCA Nationals this year in the freshman division at 182 pounds. The AuSable Valley grappler won over 20 times at 160 in 2014-15 and will look to make a big splash in Section 7 in the upperweights.

“LaPier is a great kid who has worked really hard,” Hogan said. “He was training five days a week from April until football started. He’s so athletic. He’ll surprise some people.”

Saranac took the Section 7 title in 2014, but Peru returned to the top in 2015. The Tigers lost one of the top wrestlers in all of New York to graduation, state champion Jordan Bushey, however, they bring back plenty of firepower, including eight finalists from the 2015 Sectional tournament.

“We have a lot of experience on our team,” Hogan said. "We’ll have some ninth graders in the lightweights, but they’ve been wrestling since peewees and they’ve gone all over to wrestle, so they’re gonna be good. We should have a really good team this year.”

Saranac features a pair of wrestlers who could make big waves on the statewide scene in Jacob Nolan and Will Marcil as well as previous qualifiers Johnny Devins and Rafael Rivera, while Jordan Daniels and Brandon Yip will look to take that next step to the NYS championships. Colby Staley has been there before and will aim for a return trip.

“I think Saranac will be good,” Hogan said. “With Devins and Rivera out at the Sectionals and Staley getting upset in the finals, they just had a bad day, but they have a lot of talent.”

Northern Adirondack was the runner up in the team race a year ago and although state qualifiers Colin LaBombard and Leon Riley won’t be in the lineup, Austin Trombley and Roland LaPoint will look to rack up wins again, along with Sectional finalists Jimmy LaPoint, Chad King and Dalton Gilmore and 25 match winner Jace Filion.

Special thanks to Mike Hogan!