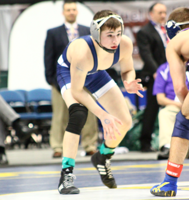 That's the question Port Jefferson's Matteo DeVincenzo asked himself as he got ready to make his debut at the NYS tournament as a freshman. He was unseeded at 99 pounds, but saw an opportunity for a performance that would put him on the map.

"No one was talking about me before the tournament, but when I got there, I started winning and my goal started becoming more and more realistic," he said.

He earned a spot in the finals and took the lead as he controlled action in neutral against three-time state finalist Derek Spann of Adirondack. While Spann came back to win the bout, DeVincenzo took a lot away from his second place showing.

"It definitely gave me confidence and helped me," he said. "I felt like next year, I'm the guy, it's my turn."

It was his turn.

DeVincenzo came into the Times Union Center with just one loss for the second consecutive season and this time swept his four matches, including a 9-4 decision in the title bout to capture the 106 pound state championship.

"It was good redemption," he said. "I felt like when I was there the first time, I got so close. It was a weird feeling to get so close and not win. Getting it done as a sophomore was a relief."

The crown had more significance as well as it was the first-ever Division 2 state championship won by a Long Island wrestler.

DeVincenzo added a pair of podium performances at Virginia Beach and was named to the NHSCA Academic All-American team a few months ago, one of just five New York wrestlers to receive the honor.

As a top student-athlete, DeVincenzo focused on Ivy League options for college.

"Watching Tristin [his older brother who is now a freshman at Penn] go through the recruiting process helped me," he said. "He's been telling me that being in the Ivy League is a lot of hard work, but it's manageable and it's gonna be worth it."

While DeVincenzo visited Penn, while also considering Brown and Harvard, he committed to Princeton on Thursday.

"Princeton is one of the best academic schools in the country and the wrestling is getting better and better every year," he said. "The room is tough with good lightweights to work out with. I'm excited to work with Coach [Joe] Dubuque, a two-time national champ. That will be a huge help for me. All the coaches are great. When I was there, I felt like it was the place for me. I loved walking around, hanging with the guys and watching practice.  The campus is beautiful and everyone was welcoming and having a good time."

DeVincenzo said he's excited to be part of a recruiting class that includes a number of Top 100 wrestlers, including fellow Long Island grappler Christian Araneo of Ward Melville.

And with his college choice now determined, DeVincenzo is ready to go for his second NYS title.

Last year, as a junior, he captured the Eastern States crown, beating state champs Dane Heberlein of Alexander, Theo Powers of Mexico and Kyle Quinn of Wantagh on his way. He then went into the state tournament undefeated in a loaded bracket at 120 pounds that included five wrestlers who have finished on top of the podium in New York State.

He cruised into the semis with a pin and a tech fall before dropping his only bout of the campaign, 1-0, to eventual titlewinner Jimmy Overhiser of Lansing.

"I had a pretty extensive winning streak until then," he said. "The last time I had lost was at Eastern States [in 2014]. I took neutral when I should've taken bottom. It was the first time in the wrestle backs in my whole high school career. But I knew I couldn't be down on myself because I had a former state champ [Lyndonville's Tony Recco] next and had to bounce back."

He blanked Recco by a 5-0 score in the consolations before topping Walton's Logan Robinson for bronze.

"At that point, anything less than third and I would've been a lot more upset," he said. "I realized how I'll feel if I lose. Now, I feel really good going into my senior year. There's so much you can learn in a year. The biggest thing for me was mental.  I’m definitely a better wrestler overall, but I'm much better mentally. I'm definitely not lacking any confidence."

"I want to place at Super 32, win Eastern States, win states, go undefeated and win a national title this year," he said.

He said his experiences to date have taught him "to take advantage of the moment."

DeVincenzo will look to take advantage of the moments in his final high school campaign before taking it to the next level with the Tigers.

Matteo DeVincenzo said, "Obviously I wouldn’t be here without my coaches Mike Maletta, Ian Schneider, Mike and Ryan Patrovich, my parents and my family. I want to thank them and all my workout partners."