Most of the Binghamton team was on campus during the summer, training and getting ready for the upcoming campaign. It’s a very young group, with around 90% of the roster having freshman or sophomore eligibility (eight of whom were NYS high school champions).

Translating those achievements to the college level is one of the big things assistant coach Jasen Borshoff said has been discussed quite a bit this year.

“Consistency is a big thing, especially with a young team,” Borshoff said. "Last year, we'd have one of our guys beat a national qualifier and then lose to someone not at the same level. If we can be consistent, that’s where we’ll see a lot of growth."

And that's not the only topic of emphasis.

“We know we have a lot of potential,” he said. “Potential is good, but unless you do something with it, it doesn’t matter. That’s one of our themes this year; go out and prove to people that you’re the man.” 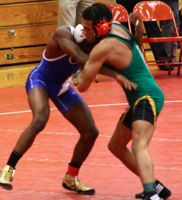 Thierno Diallo got off to a strong start last season as a freshman, taking fourth at the Binghamton Open with his losses against All-American Darian Cruz and NCAA qualifier Ben Willeford. However, after winning a few matches at Midlands, he sustained an injury and missed most of the rest of the season. However, he’s back and will compete with newcomer Steven Bulzomi, a former Section 11 grappler, at 125.

“Thierno was wrestling well last year,” Borshoff said. “He has all the talent in the world; he just needs to put it together. Steven Bulzomi might not be well known, but he’s really tough. He went to UWW Junior Nationals and was a round from placing, and that was when he was training with high school kids. Both Diallo and Bulzomi think they’re the man, so we’ll see. It should be a good battle.”

Jake Nicholson, a two-time Junior College All-American at Jamestown, transferred to the Bearcats and is the frontrunner for the starting role, with freshman Ian Lupole a likely redshirt.

“Nicholson has so much upside,” Borshoff said. “He’s a really scrappy kid and very dangerous. He needs to figure out what he can use and what he can’t at the Division 1 level. It’s a learning process and he’s definitely progressing.” 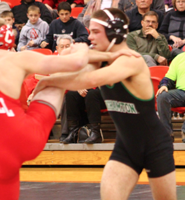 Dylan Caruana won 19 bouts a year ago at this weight. He’ll be challenged by two-time NYS finalist Jesse Dellavecchia, a true freshman from East Islip.

“Dylan is a hard-nosed kid; one of those kids who does everything right,” Borshoff said. “He’s a super hard worker and a great leader. He’s had some good wins in the past and had an up and down year last year. He has some high expectations for himself. Jesse is pretty darn good on top - he’ll turn a lot of people. He’ll give people fits. He has to learn when he can roll around and when he can’t. We’ll see what happens there. Dylan’s the leader now, but we have two tough, scrappy guys.”

Joe Mastro, a redshirt sophomore, was injured while at 157 pounds last year and is making the move down to 149. He’s joined by true freshmen who had highly successful high school careers - Tristan Rifanburg, Jake Einbinder and Frankie Garcia.

“Tristan Rifanburg and Frankie Garcia are both Norwich kids who are really tough,” Borshoff said. “Tristan had a really good summer. He has high expectations and really believes in himself. Frankie just goes out there and competes really hard - he’s fun to watch, just tries to score points. He’s very athletic. Einbinder is very talented and is also very athletic and has tons of upside. Joe Mastro will probably go in as our starting guy at 149 and we’ll see how it goes. He’s worked hard to come back from his injury and had a really good offseason.”

Vincent DePrez was the starter at this weight as a true freshman, racking up 20 wins in his college debut. He’ll be joined by Oklahoma State transfer Chris Koo.

“We haven’t made any redshirt decisions here yet,” Borshoff said. “Vincent has come a long way from last year and he had a pretty good first year. He’s a really tough kid and has developed a much better feel for the sport. Chris Koo wrestles hard and loves wrestling. He’s a great addition to the team. We don’t know what will happen here but we have some really good options.”

Ben Schroeder and Joe Jackson will add depth at 157.

Anthony DePrez compiled double digit victories as a redshirt in 2014-15. He’ll now have his chance to be the starter. Meanwhile, multi-time NYS placer Blaise Benderoth from North Rockland will also be at this weight.

“Anthony has a lot of potential,” Borshoff said. “He had a decent redshirt year. He got progressively better each year of high school and it’s been the same way in college. He’s young and he has the ability to be good for Binghamton for four years. Blaise is a really good scrambler and is very athletic. The big thing is going through the college grind. We’re excited about his future and are looking to redshirt him this year.”

Jack McKeever was an NCAA qualifier for the Bearcats last season at 184 pounds after taking sixth at the EIWA tournament. One of two seniors listed on the team’s roster, McKeever is moving down to 174 for his final campaign.

“Jack is ready to go,” Borshoff said. “He works harder than most people I’ve ever been around. When he came in, we had to pull him out of redshirt and he went 1-15 in the starting lineup. A year later, he won 20 matches before he got hurt. Last year, he won around 25 matches and qualified for Nationals. He’s hard to score on and tough on top and he’s becoming a leader in the room beyond his work ethic. He’s speaking up, pushing guys when they need to be pushed. He could have a really good year.”

Adding depth in this class is Jake Kocsis, who got off to a solid start, but then missed most of last year. Borshoff said he’ll be a very good future 174 pounder.

Steve Schneider got his hand raised 23 times as a true freshman at 174 pounds, including three victories at the EIWA tournament. He’s bumping up and looking to go further as a sophomore. Another former NY high school star, Reggie Williams, is also in the mix.

“Steven had a good freshman year, but didn’t reach his goals,” Borshoff said. “He’s a hard nosed kid that loves to wrestle. He has high expectations for this year. He’s the guy right now for us at this weight. He’ll be pushed by Reggie Williams, who missed a lot of last year but is athletic and could be a really good wrestler. It’s a really tough weight in the EIWA.”

“Mark Tracy is a tough kid who does everything right,” Borshoff said. “He’ll have some ups and downs as a freshman, but he’s the kind of kid we hoped he was. He’ll have a good college career, we just need to see how quickly he gets acclimated to the starting lineup.” Tony Lombardo will likely back Tracy up.

Another NYS champion, Connor Calkins, will begin his career as a starter at heavyweight in his freshman campaign. Two high school Class of 2015 graduates - Sean Dee and Brock Cvijanovich will likely redshirt.

“Connor has made huge jumps since last year,” Borshoff said. “He had a really good redshirt year - he won close to 30 matches. He’ll have a good match right off the bat with Billy Smith of Rutgers and we’ll see where he’s at. He’s really strong and dangerous - he has a different feel for a heavyweight. Sean Dee is even bigger than Connor. He’s a great kid, who is actually right on par with where Connor was last October. Brock Cvijanovich is hard nosed. If we asked him to run through a brick wall, he’d do it. We actually have a lot of depth at heavyweight. All three guys have the potential to do well in college.”

What's next? Wrestleoffs are scheduled for this Friday afternoon at 4:30. And then, it's time for the season to begin.