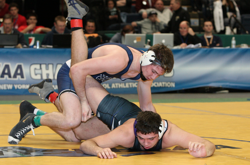 Coming back from a second round setback at a tournament like the Super 32 Challenge is never easy. But Ward Melville’s Christian Araneo had an extra obstacle in his way.

“During my loss, I got thrown and part of my eye split open,” he said. “If I got stitches, I would’ve been out of the tournament. So I decided to get it glued. They had to redo the glue before every wrestleback match. It wasn’t that terrible, but it was a nuisance. It was definitely a grind.”

Araneo continued to fight, moving his way through the consolations to take seventh place, a result that got him some national attention.

“I wasn’t expected to do much there because of the ranked kids at my weight,” he said. “Colleges didn’t really know about me because I didn’t even place in Suffolk County at that point. But once I knew I could place in one of the top tournaments in the nation like Super 32, I knew I should and could win states.”

According to the Ward Melville senior, at the Section 11 championships in 2014, he battled that year's NYS fifth placer (and 2015 state champ) David Hamil of Deer Park in an exciting bout.

“I was supposed to be up 8-7 at the end of the match, but there was a scoring mistake and it ended 7-7,” he said. “We wound up going to overtime and he won. That match in particular made me want to work harder to be at a different level than everybody else.”

As a junior, Araneo was on a different level. He went 43-1 with 39 of those wins by bonus points, including 23 technical falls and seven pins.  A lot of his points were racked up in the top position.

“Last year I had a lot of help from Gregor Gilliespie, who has been my coach on top since seventh grade,” he said. “The goal is always to get the pin, but if I don’t, I just keep scoring points until I get the tech.”

Araneo dominated his way to his first Suffolk title in 2015 and came in as the favorite at the NYS championships in Division 1.  Although it was the first time for Araneo competing at the event, he had been in the crowd the previous year at the Times Union Center.

“I went in the past to watch my teammate Nick Piccininni, to provide moral support,” he said. “Just watching Nick on the big mat in the finals with everyone watching and hearing the crowd cheering, I needed to do it the next year. I needed to shine.”

He did. He started off with a tech fall in the opening round before facing Freeport’s Deny Tavarez in a match that turned out to be his closest win (4-3) of the year.

“It was way too close for comfort,” Araneo said. “I couldn’t wrestle the way I wanted to - I couldn’t get on top. He wouldn’t let me shoot - he backed up. It was a 12 minute match when I looked at the film because every five seconds we were going out of bounds. It was crazy. But after that match, I knew I should be fine the rest of the way.”

He cruised in his semifinals bout to earn a spot in the championship contest against Nick McShea of Monroe Woodbury, who was undefeated at the time.

“I was really hyped up,” he said. “I was going insane in my mind. I wrestled [McShea] at Journeymen last year, and I beat him. I was prepared for the things he does. I came out the dominant wrestler in that match.”

Araneo won by a 13-4 major decision to earn state gold.

“The first thing I did was jump into [Matt Sganga’s] arms,” he said. “He’s known me since third grade and coached me from grade school up through that match. It was an amazing feeling - I finally did what I dreamed of.”

He continued to add to his resume with a third place showing at NHSCA Junior Nationals at 195, with his one loss a two-point setback to one of the top upper weight wrestlers in the nation, Sammy Colbray of Oregon. He was especially excited about his victory over Pennsylvania's Drew Phipps, a wrestler who had pinned him in Virginia Beach two years prior.

Fast forward to this weekend, when Araneo rolled to the title at the Journeymen Classic at 225 pounds. He said he could have competed at 195, but he’s been busy the past few weekends taking official recruiting visits to UPenn, Columbia and Princeton.

On Tuesday night, Araneo gave his official commitment to Coach Chris Ayres and the Tigers, where he said he may begin at 197 pounds, but expects to become a heavyweight.

“The coaching staff was a big reason for picking Princeton,” Araneo said. “They’re very upbeat and want everyone to be the best they can be in and out school. Of course, Princeton being #1 in academics in the country is important and the wrestling team is up and coming. The team is gonna be really good in a couple of years and hopefully I can be a big part of that. I had a great time on all my recruiting trips, but there was a feeling I had at Princeton that made me want to go there. I felt like they really wanted me there and I fit in.”

Whether he’ll fit in at 195 or 220 pounds this season in New York has not yet been determined, as Araneo said he may weigh in at both throughout the season and make a decision as the postseason approaches.

He said throughout his years at Ward Melville, having four-time state champion Nick Piccininni [now at Oklahoma State] in the room, especially as the big tournaments got closer, was significant.

“We always went hard in practice - we saw how Nick worked," he said. "Nick was always pushing himself because he was gonna win another championship.”

Now, that’s exactly what Christian Araneo plans to do as a senior.

In addition to those already mentioned, Christian Araneo thanked Donny Donnelly, “my workout partner for my whole life who pushed me to achieve my goals”, Craig Vitagliano “who completely changed my wrestling career from 7th to 10th grade”, current workout partner/coach Kyle Cerminara, his coaches at Ward Melville and his family.