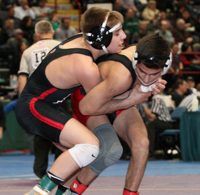 When Penfield’s Parker Kropman walked off the mat on Sunday at the Journeymen Classic, he didn’t feel like he wrestled his best. [He went 2-1 in contested matches, with his loss in overtime to his bracket’s eventual champion].

“I didn’t wrestle all that well,” he said. “But the Binghamton coaches still talked to me about how much success I could have at the next level. If they believe in me that much, I gotta believe in them and what the program will do for me in college.”

So, Kropman, a two-time New York State placer, gave his commitment to the Bearcats, where he said he’ll likely compete at 141 pounds initially.

“When I took my visit to Binghamton a few weeks ago, it clicked for me,” he said, adding that he also considered Cornell and Lehigh. “I liked all the wrestlers and loved the coaches. It felt like a place where I could see myself for the next four or five years.”

Kropman announced his presence on the statewide scene as a sophomore, when he won a tough 106-pound bracket at the Eastern States Classic, including victories over California’s Chris Marin, multi-time NYS medalist Vinny Vespa of Monroe Woodbury and 2014 state champ (and three-time placer) Matteo DeVincenzo of Port Jefferson.

“That was awesome,” he said. “That was probably the best feeling I’ve had in wrestling.”

However, it was just one of many highlights for Kropman during his career.

As a freshman, he won more than 30 matches at 99 pounds. He then followed up with close to 40 victories as a 10th grader, ending that year with a fourth place showing at the New York State championships at 106 pounds.

During his junior campaign, Kropman notched over 40 wins and once again returned to the Times Union Center, where he came out on top three times to finish fourth at 126 pounds.

“I was pretty happy with the season,” he said. “I wish I did a little better at the state tournament; I thought I could’ve made the finals. Now, I’m working on getting stronger and better.”

“Obviously, taking fourth twice is not what I wanted,” he said, adding that he’ll likely compete at 132 or 138 pounds in 2015-16. “I want to win a state title this year, but my main goal is to get better and get prepared for college wrestling. That’s a totally different level. I’m just excited to get after it this season and then continue on at Binghamton.”